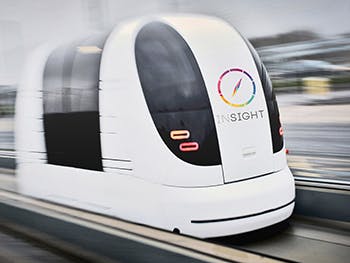 A £2.3 million funding package which will bring state-of-the-art driverless cars to Birmingham has been given the green light.

The ‘INSIGHT’ project, an industry and academia partnership, will see autonomous vehicles pull into city centre streets after the cash was secured from the government’s £100 million Intelligent Mobility Fund - aimed at developing autonomous vehicles in the UK.

INSIGHT aims to cut congestion, lower emissions and improve transport access for people that are blind, visually impaired or have problems with mobility.

The project will see two the hi-tech shuttles arrive in the region from next year which will be tested over the course of a pilot period.

INSIGHT will focus on improving the accessibility of transport for people who have difficulty travelling independently, as well as on the safety, reliability and integration of autonomous vehicles into an urban environment.

Britain will need to capitalise on new technologies like driverless vehicles, securing high skilled jobs for those who want to work hard and get on, and contribute to a more prosperous future for the whole of the country.
Sajid Javid, Secretary of State for Business, Innovation and Skills

The cars will be built by modifying existing Heathrow Ultra-pod vehicles to incorporate state-of-the-art 3D imaging and innovative sensors for navigation and safety of not only the passengers but also pedestrians, road users and other vehicles.

The vehicles will feature the world’s first four-dimensional tactile display which will provide continuous sensory feedback for blind users over the course of their journeys.

Advanced indoor and outdoor positioning systems will allow blind users to know their exact locations using a smartphone app and will link to a cloud-based system which will allow nearby vehicles to be virtually requested or ‘hailed’.

Dr Umar Daraz, Director for the Institute of Sustainable Futures at Birmingham City University, said: “We are witnessing the start of the next automotive revolution in the region that will place the city at the forefront of this technological revolution opening new opportunities for our economy, society and engineers of the future.

“We are delighted that BCU’s reputation as innovators in autonomous vehicles has been recognised by Innovate UK. INSIGHT is part of our commitment to support innovation, productivity and the skills agenda in our resurgent car industry, robotics and autonomous systems, which the government has identified as one of the ‘eight great technologies’ in which the UK can be a global leader. This is a real boost to the Midlands Engine”

“Driverless vehicles for mobility of all of our citizens will become a reality in the very near future and this project represents a major milestone in realising that vision.”

Academics and researchers at Birmingham City University will work alongside Birmingham City Council to compile detailed safety cases for the use of driverless vehicles and run trials with members of the public including blind or visually impaired citizens in 2017.

Julian Turner, CEO Westfield Sportscars, said: “The UK is in an excellent position to become a world leader by reducing congestion on our roads and helping the environment in the process by lowering emissions.

“This will lead to the generation of new opportunities and highly skilled jobs across the country keeping the UK at the forefront of this technology.

“The INSIGHT project will provide public confidence that proper safeguards are in place for the citizens and road users alike, and the trials will go a long way to understand the needs of the users of this exciting means of mobility.”

Roger Wilson-Hinds, Conigital Group said INSIGHT would strive to create a new paradigm in mobility for all citizens in the streets of a future smart city.

“Autonomous Vehicles will for the first time provide a truly inclusive and tailored transport solution to encompass those that are often overlooked, senior citizens and blind/visually impaired people in our growing communities to become economically and socially active rather than isolated and dependent.”