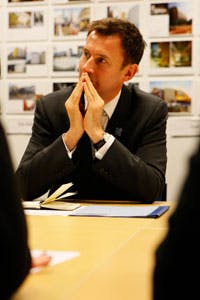 Culture Secretary Jeremy Hunt is to visit Birmingham today (Thursday, August 18) to launch a nationwide roadshow to outline the vision for Government plans to create local television services across the country.

Mr Hunt visits Birmingham City University which is hosting the first of six summits to discuss the issues and benefits of new local TV services which are expected to launch on the digital terrestrial TV platform Freeview by 2015.

Media regulator Ofcom has identified 65 towns and cities in the UK where it is technically possible to launch a local TV service and licences for the first 10 to 20 are expected to be granted next summer. The discussion groups start in Birmingham today and move on to Manchester (tomorrow), Newcastle (24 Aug), Cardiff (26 Aug), Glasgow (9 Sep) and London (14 Sep). A govt consultation on the plans closes on 23 Sep

The Birmingham event will be hosted within the University’s Faculty of Technology, Engineering and the Environment at Millennium Point at Eastside in Birmingham’s city centre.

Eastside will also be home to phase one of the Birmingham City University’s City Centre Campus, which is due to open in 2013 and set to deliver “the biggest media studios between London and Salford”. The giant media hub will include TV, radio and photographic studios and will underpin the University’s media courses.

The summit will be attended by potential bidders, media and creative companies, civic leaders and MPs, plus representatives from university and colleges.

Joanna Birch, Head of Enterprise Development at Birmingham City University, said "We are widely recognised locally and nationally for our excellence in media education so we are a natural host for the first national summit on local TV.

“Our longstanding partnerships with major broadcasters including BBC, ITV and Sky, as well as our extensive networks and contacts with local media production outlets have already been recognised by Skillset, a national skills organisation that ensures learning meets the real needs of the creative and media industries.

“Our latest work in developing specialist, industry-led training across gaming, TV, radio and digital platforms, along with our multi-million investment to create one of the UK’s biggest and best media education facilities reinforces our long-term commitment to this important sector.”