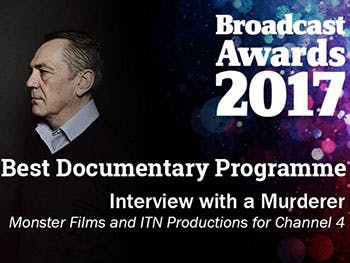 The ground-breaking Channel 4 programme ‘Interview with a Murderer’, fronted by Birmingham City University criminologist Professor David Wilson, has been announced as the Best Documentary Programme in the Broadcast Awards 2017.

‘Broadcast’ is the leading publication for the broadcast industry, with annual awards recognising and rewarding the UK’s most successful and pioneering content, creators and channels.

Produced by Monster Films and ITN Productions, ‘Interview with a Murderer’ fought off competition from BBC One’s ‘Behind Closed Doors’ and ITV’s ‘The Murder of Sadie Hartley’ to scoop the esteemed accolade of Best Documentary Programme.

In the 90-minute documentary, Professor Wilson conducts a series of revealing interviews with convicted murderer Bert Spencer, the man never charged with, yet widely suspected of killing Carl in 1978 – a crime he has always denied.

Professor Wilson spent more than 20 hours in the company of Bert after Spencer asked the criminologist to challenge him on his account in order to set the record straight.

I’m absolutely delighted to have won this prestigious award and hope it might be a small step in helping get justice for Carl Bridgewater and his family.
Professor David Wilson, founding director of Birmingham City University’s Centre for Applied Criminology

During the programme, Bert Spencer’s first wife, Janet Spencer, comes forward to speak to Professor Wilson and discloses new allegations about Bert’s behaviour on the day that Carl died.

Watch ‘Interview with a Murderer’