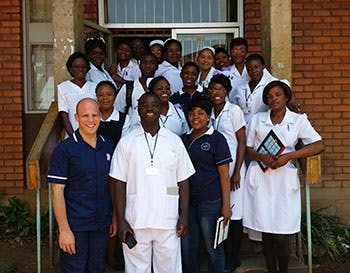 A nursing lecturer at Birmingham City University is leading a medical programme in Zambia that is helping to set up a framework for developing and qualifying nursing personnel in the Southern African country.

Major Chris Carter teaches in the University’s Defence School of Healthcare Education, where he heads up a team responsible for training the British Armed Forces’ future nurses. Prior to this he worked in the Army as a nurse, having completed a tour of duty in Afghanistan and other deployments to the Middle East as part of the Queen Alexandra Royal Army Nursing Corps.

In 2015 Major Carter answered an advertisement in a medical journal for volunteers to set up a critical nursing care program in Zambia; a stable, landlocked, low income country with 60 per cent of the population living in rural communities. Yet whilst it is poor, Zambia is training its doctors and anaesthetists, helped by international investment in terms of money and resources.

Initially the task facing Chris and the three other volunteers was to visit Zambia’s main hospital and help them to identify what resources were needed, and to advance a framework for developing their nursing staff.

“The doctors there realised that their project to develop healthcare was not going to reach its full potential unless investment was also being made in nursing staff. The doctors were being trained in current practice, applied in the context of a developing country, dealing with diseases totally different to what we see in the UK, but which are common there. However, without the nurses who do the majority of the care, the project wouldn’t work.”

“What transpired was that, despite what the advert said, in fact there was no project, no funding – nothing.”

Therefore, Major Carter convinced The Tropical Health and Education Trust (THET), a UK NGO, to fund him for a two week needs assessment. Since then he has been to Zambia seven times, staying for periods of two to four weeks. In 2016, for example, he worked with the Zambian Ministry of Health, travelling almost 5,000km and visiting 16 public hospitals as he gathered a snapshot of the challenges facing nurses and critical care in the Commonwealth country. 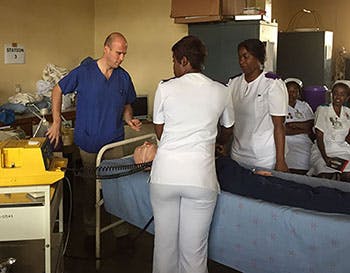 Chris and the team then wrote a report for the Ministry of Health, recommending what they can could do as a project group to help build the country’s capacity in nursing capability, including a graduate programme. As a result, Chris attracted funding from the UK’s Department for International Development (DFID), the EU and Birmingham City University, which also provides all the professional back office function and governance needed to keep such a project running.

From nothing, Chris has built up the team which has grown from just four enthusiasts into a truly international collaboration. Working closely locally with the Lusaka College of Nursing, the Zambia Union of Nurses Organization (ZUNO), the Ministry of Health and the General Nursing Council of Zambia, Chris’ work is delivered in accordance with the country’s own priorities in the context of the UN’s Sustainable Development Goals.

Such has been the success of the project, 900 healthcare workers have been trained since 2015, that the Army is keen to explore the benefits for the UK Armed Forces. Last year Chris took six students from the Defence School of Healthcare Education – one from the Navy, the rest from the Army – to Zambia as part of their training.

Not only did Birmingham City University students get to see the treatment of diseases such as tuberculosis (TB) and malaria – which while rare in the UK, in their careers they will have to know about – perhaps more importantly they gain valuable experience in the pressures of practicing in a resource-limited environment. 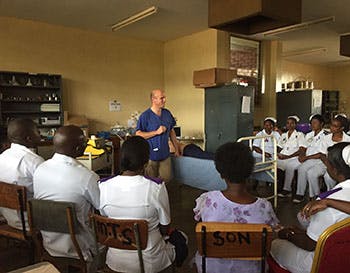 “We watched a doctor performing a procedure and I talked the students through it. I told them to watch how he and the nurses were working – only opening equipment when they needed it, so they didn’t waste anything – because it’s too precious.

“I challenge them; imagine you are on board a ship, or in the field – you’re not going to have an infinite supply of gloves, oxygen, swabs. Plus, when you’ve got 10 patients on a ward, and there’s only three of you, there’s no agency you can call, no extra staff, it’s just you.”

Chris uses the experience to get the students thinking in a different way. A way which might just make a difference when on the battlefield. 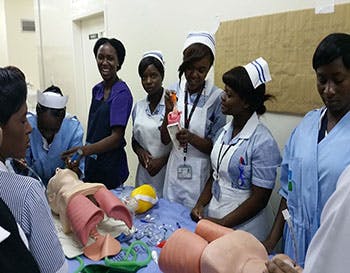 “I get them to think about what they would do in that situation. Which is your sickest patient at the moment? Why do you think that? I get them to think through some of the clinical decisions they would never face in the NHS. ‘You’ve only got 10 ventilators, but you’ve got 11 patients who need it – what are you going to do?’”