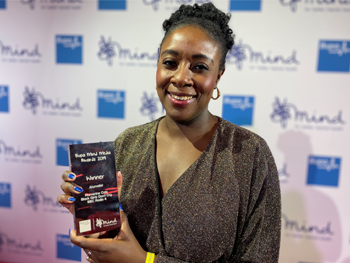 A Birmingham journalist, broadcaster and lecturer has landed a prestigious award recognising her work in uncovering the mental health challenges facing women from African-Caribbean backgrounds.

Marverine has been journalist and broadcaster for the last 17 years and has worked at senior levels at the BBC, ITV and Sky News as Reporter, Producer and Newsreader, as well as producing several BBC radio documentaries over the last decade

She created the documentary to discuss how stereotypes and societal issues leave black women disproportionately more likely to face the challenges of anxiety, depression, panic attacks and OCD.

Research has also shown a shocking increase in instances of self-harm among black women aged 16-34, and that people from black and ethnic minority backgrounds are much more likely to be detained under the Mental Health Act than white people.

Exploring the first-hand experiences of black women in the West Midlands, Black Girls Don’t Cry challenges the perceptions and expectations of the ‘strong, independent, sassy’ black woman, to reveal the personal struggles many experience.

Collecting her award Marverine Duffy said: “This is a story about black women and our experiences, it was begun or sparked by my own story of depression. But it’s not about me as a journalist, it’s about telling that story of the fact that black women are more prone to anxiety, OCD, self-harm, panic.

“I couldn’t have made this documentary without my incredible contributors, these women who agreed to tell everyone on Radio 4 their stories.”

In Black Girls Don’t Cry, Marverine meets Jay Mountford and Jade Laurie-Hart two Birmingham women to discuss the challenges their mental illnesses present, ranging from being sectioned and hospitalised, to the frustrations about their own treatment and community care.

The documentary highlighted the support being offered by charities in the city, like Catalyst 4 Change. It also highlighted the need for culturally-sensitive NHS mental health support and therapies for African-Caribbean women in the UK.

The Mind Media Awards puts the media in the spotlight due to the major impact it can have on people’s mental health. The Awards are designed to recognise and celebrate the best possible representations of mental health across TV, radio, print and online.

Black Girls Don’t Cry first aired on Radio 4 in July 2018, it is still available to listen to on BBC iPlayer.