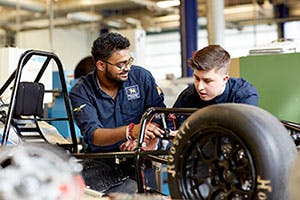 Engineering students from Birmingham City University are on track for the world’s biggest student motorsport competition at Silverstone from 9-13 July.

The competition – run by the Institution of Mechanical Engineers - is the world’s largest student motorsport event and challenges student engineers to design, build and race a single seat racing car in one year.

Of the 178 teams to apply, 114 teams from 38 different countries have successfully claimed a place for the competition – and Birmingham City University will be among those lining up at the home of British motorsport.

Competing at Silverstone will be 61 teams from UK universities – up from 47 last year - and 53 electric vehicles, a 120 percent increase on 2013.

For the first time, teams from China, Ecuador and Jordan will compete, as well as teams from as far afield as South Africa, Pakistan, Australia, Canada and India.

David Jones, Course Director for Motorsports Technology at Birmingham City University, said: “The BCU Racing Team have designed and developed a brand new car this year which has been thoroughly designed, built and tested by the students themselves.

“We concentrated on designing a low centre of gravity, even weight distribution, low Carbon Dynamic Airbox and lightweight race car. It’s our best design to date, and we are really looking forward to the event.”

Jon Hilton, Chairman of Formula Student said: “Formula Student is a global competition and we want to continue to encourage brilliant young engineers from across the globe to improve their practical skills and get ready to play their part in the vibrant worldwide engineering community.

“The innovation demonstrated by these young engineers gets more impressive every time and I’m extremely excited to see what they have in store for us this year.”