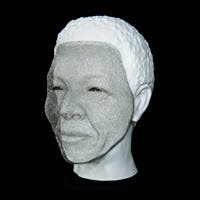 A tutor from Birmingham City University has created a unique piece of art in celebration of the 94th birthday of the former South African President, Nelson Mandela.

Goldsmith and jewellery designer Tom Rucker created the amazing statue which was unveiled in Cape Town earlier this year. Tom, who is a specialist tutor for the University’s School of Jewellery Summer course programme, designed and made the statue which took over a year to make and is made from platinum, white porcelain, black rhodium and black diamonds.

Tom was inspired to create the sculpture following a trip to South Africa in 2009. On speaking to local children, Tom learnt that their hero was Nelson Mandela and it was this which sparked the idea to create the statue in honour of the former South African President.

Colleagues from Birmingham City University’s Jewellery Industry Innovation Centre (JIIC) were on hand to support the project. By using a specialist ‘Z corps’ machine, they were able to convert digital data into a 3D image which Tom was then able to use as a guide when constructing the art work.

Tom said: “I would like to thank the staff at the JIIC for their help and support during this project. The statue was unveiled in Cape Town and is now on display in the Rupert Museum in Stellenbosch, South Africa. I am really happy that the sculpture has found a home in South Africa and is exhibited beside a premium collection of contemporary designs.”

Gay Penfold, Manager of the JIIC – part of Birmingham City University’s School of Jewellery said: “The JIIC were delighted to assist Tom in his creation of this unique tribute to Nelson Mandela, this project was one of the many prestigious and bespoke commissions the JIIC undertakes in partnership with companies and designers.”