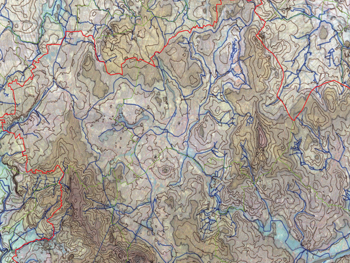 An ambitious vision to create a National Park in the West Midlands which would span more than seven cities and create hundreds of miles of green space, conservation areas and new cycle routes has been unveiled.

The bold proposals have been drawn up by Kathryn Moore, Professor of Landscape Architecture at Birmingham City University, and would make the region home to the UK’s 16th official National Park.

The 15 existing National Parks are in areas including the Yorkshire Dales, Snowdonia, the New Forest and the Peak District, but the new vision imagines a future where an area often labelled a concrete jungle is transformed to take advantage of its historic and natural landscape.

It would reimagine what the West Midlands could become by taking a new look at the way
its landscape is viewed.

The concept, which was unveiled at the Critical Artistic Thinking in Design Conference, would have the potential to support further regeneration, boost environmental conservation, improve transport link and drive inward investment and tourism into the region.

If it could be delivered, a West Midlands National Park could also help create new jobs across the West Midlands region and boost the economy by transforming the image of the area.

The idea uses the transformation of the region as a springboard, with the arrival of HS2, Birmingham’s successful bid for the 2022 Commonwealth Games and Coventry’s City of Culture win, reigniting the vibrancy and regeneration of the area.

Kathryn Moore, Professor of Landscape Architecture at Birmingham City University, said: “When we think of a National Park our natural inclination is to look at rural areas but there are swathes of natural beauty right here in the heart of a metropolitan region.

For a long time the West Midlands has been viewed as a concrete jungle and the way that we have carried out our planning and construction has fed into that but if you look at the maps in a different way, there is huge potential for this project.
Professor Kathryn Moore

“Not only could creating a National Park bring some real economic, social and environmental benefits, it would also drive investment, boost tourism and create new jobs at the heart of the country.

“This vision is about making the most of the opportunities the region has right now and making sure the arrival of HS2, the Commonwealth Games and the City of Culture leave a lasting legacy here and something we can all be proud of.

“This vision is all about quality of life. We want to have a better life, here together in the West Midland National Park. It starts here. It will happen.”

The vision has been crafted to show the region in a different way by inverting maps, which traditionally highlight roads and building infrastructure, to instead focus on the contours of the landscape, its rivers, streams and canal networks, heritage biodiversity, identity and culture.

Using the plateau the West Midlands is built on to create the National Park could transform perceptions of the region’s Combined Authority area.

The next steps will see case studies undertaken on the Tame Valley, Curzon Street and Birmingham’s Commonwealth Games bid to decide possible revenue streams and how the vision may be realised.