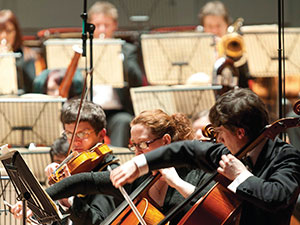 Frontiers Festival of Contemporary Music returns to Birmingham next month to take a close look at the use of technology in contemporary music and in particular at the intersection between electronic and acoustic music.

As well as bringing together highly respected artists from the world of contemporary music, Frontiers Festival provides a platform for the region’s most talented young composers and musicians at Birmingham Conservatoire to showcase their works.

Rosie Clements, a fourth year Composition student at Birmingham Conservatoire and Frontiers Festival Co-ordinator, said: “I’ve been given a very real opportunity to develop my skills in the wider world alongside my composition studies. It’s an exciting project to be involved in, not only from a work experience perspective, but in that there are some incredible performances lined up from the likes of Decibel and our own composition department.”

Festival highlights include a rare performance of Jonathan Harvey’s seminal From Silence side by side with Gérard Grisey’s Le temps et l’écume, the world première of Ed Bennett’s new PRS commission for piano and live electronics, and a monographic concert by the Ensemble Court-circuit devoted to the music of Philippe Hurel on the occasion of his 60th birthday.

The Festival will also feature Birmingham Conservatoire’s own Thallein Ensemble and contemporary pianist Xenia Pestova who will showcase the ROLI Seaboard, a new musical instrument that reimagines the keyboard.

Frontiers is a year-round platform including an annual festival for contemporary and experimental music and arts led by Birmingham Conservatoire, part of Birmingham City University. Since 2008, the festival has featured some of the world's most celebrated composers, including Pierre Boulez, Louis Andriessen, Heiner Goebbels and Robert Ashley.