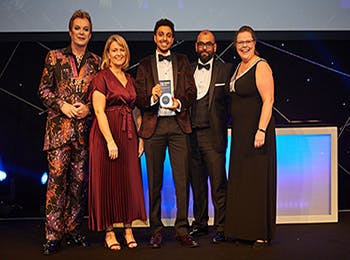 A Birmingham researcher who found that twice as many Muslim soldiers fought in the First World War as had been previously reported, has picked up a top award recognising the impact of his research.

Dr Islam Issa, Senior Lecturer in English Literature at Birmingham City University, scooped the accolade for 'Research Project of the Year: Arts, Humanities and Social Sciences’ at the Times Higher Education Awards, renowned as the ‘Oscars’ of the Higher Education sector.

Dr Issa's research found that at least 885,000 Muslim soldiers were recruited by the Allies, more than double the 400,000 which had previously been estimated.

The studies saw him trawl through thousands of personal letters, historic archives, regimental diaries and census reports to produce the first-ever exhibition dedicated to the contribution of Muslim soldiers fighting in the Great War.

The exhibition named 'Stories of Sacrifice’ was commissioned by the British Muslim Heritage Centre based in Manchester.

The findings in the study have been used by major institutions including the Armed Forces, British police forces and by hundreds of school pupils as part of a programme of diversity training.

Of course, I'm delighted. This award really does feel special. This project has received a lot of attention but this is the finest feather in the cap. I'm grateful to everyone who contributed or supported me and there are many such people. I’m especially happy some of those got to enjoy the evening with me too.

Findings in the study also revealed personal stories of soldiers' first experiences visiting London, the role football played during the war and the varied roles undertaken by the troops – including trench building and transporting vital goods and materials.

The exhibition has been visited by an array of high profile attendees including HRH The Prince of Wales and London Mayor Sadiq Khan.