A generation has been written off due to Muslim-Western tensions, says leading female campaigner 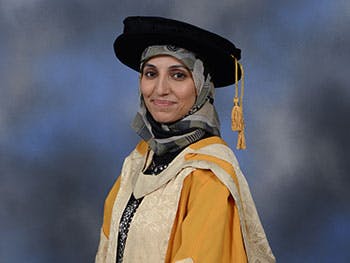 A community has been demonised and the reputation of Birmingham damaged due to the Muslim-Western tensions that exist following the Trojan Horse investigations, said community activist Salma Yaqoob this week at a graduation ceremony at Birmingham City University.

Salma was presented with an Honorary Doctorate degree, on Monday (26 February) where she spoke about some of the issues affecting her local community.

The qualified psychotherapist warned that if the conversation does not begin to shift from the 'war on terror' to the 'impact on individuals' then even more pressure will be placed on an already-strained public health system, which will be forced to step in to provide additional support for Muslim communities.

"Issues such as austerity affect everyone but some communities face extra barriers, such as unfairness and injustice," argues Salma, who is currently the Community Engagement Senior Manager at Birmingham and Solihull NHS Mental Health Foundation Trust. "The feeling that no matter how hard you've worked and have played by the rules, external factors can still make things difficult for you. That pain will of course manifest itself in ways that will not be healthy."

Salma also believes that the issues that arose from the Trojan Horse investigations have set back community cohesion by a number of years and that successes were wrongfully portrayed as failures to the point where whole communities were demonised.

"I feel a whole generation has been written off. The young people from those schools affected will be tainted forever with the label of 'potential extremist'.  It will stay with them for a long time, as they grow up, go to university and apply for jobs in coming years. The accusations and image being banded around in recent months of Birmingham – both nationally and internationally - have been destroyed.

"The impact of Trojan Horse on individuals has not been spoken about enough, we focus too much on the war on terror. I'm really sceptical because if the Government really cared then there would have been more public measures introduced that actively tried to undo some of the damage.  Time and time again it is left to communities and individuals themselves to deal with the fall-out."

Salma has been a community activist for several years and has tirelessly campaigned on the themes of equality, justice and peace, particularly focussing on a number of important local issues including reducing the gaps in educational achievement of disadvantaged young people.

She is a qualified psychotherapist and gained a Postgraduate Diploma in Integrative Psychotherapy and Counselling from Birmingham City University.