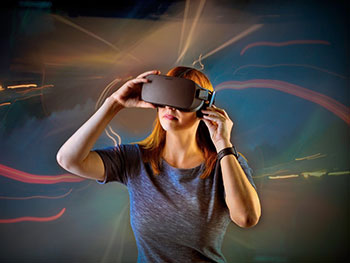 A leading Birmingham expert in virtual reality (VR) is to address the Freshman Convocation at West Texas A&M University (WTAMU) next month.

Sarah Jones, Head of Birmingham School of Media at Birmingham City University will be the keynote speaker at the US university’s prestigious welcome assembly, which formally welcomes hundreds of first-year students, known as freshmen.

Jones has been chosen to address the 1,200 students as the university’s common reader for this year is ‘Ready Player One’ by Ernest Cline. Set in a dystopia in 2043, the book follows protagonist Wade Watts on his search for a hidden Easter egg in a worldwide virtual reality game, the discovery of which will lead him to inherit the game creator’s fortune.

As the university’s common reader, WTAMU students have been asked to read ‘Ready Player One’ before they arrive on campus, bringing them closer together as a community by creating common ground for discussion.

Taking inspiration from the novel – and the recent Steven Spielberg film, which was partially shot in Birmingham – Jones’ inspiring talk will explore the story’s central themes of perseverance and team work, as the students look ahead to their studies and university experience.

Jones, an Apple Distinguished Educator, is the co-founder of VR Girls UK, a champion of women in technology and is an award-winning 360-degree filmmaker. Jones is listed as a top influencer in virtual reality – 15th female in the world according to Onalytica – and served as a television reporter for more than a decade before moving into academia.

“It’s a great privilege for me to be able to address the WTAMU freshman at the start of their university journey and I hope I can inspire the students to make the most of the opportunities that will come their way over the next few years.

My work across journalism, academia and tech has taken me to some fantastic places – both real and virtual – and I have met incredible people from all over the world as part of this. Just like Wade in ‘Ready Player One’, I’ve only been able to achieve my dreams through perseverance, and I hope to be able to convey this as integral to the student’s personal development as part of my speech.

The WTAMU Freshman Convocation takes place on Thursday 4 October at the 5,000-seater First United Bank Center in Canyon, Texas and, alongside freshmen, the event is open to the public for free.