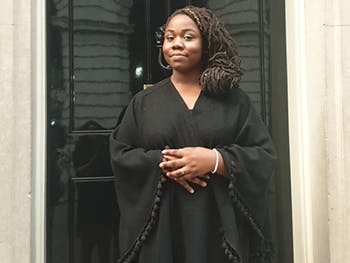 The UK’s only Race Correspondent has secured a new university role, recognising her pioneering work in championing the voices of underrepresented communities.

Award-winning journalist Nadine White, Race Correspondent at The Independent, has today (Tuesday 23 November) been named as a Visiting Industry Fellow at Birmingham City University to celebrate her work highlighting the challenges facing people of colour in the UK.

The role will see Nadine share her experiences and expertise with aspiring journalists in the University’s School of Media through a series of masterclasses, events and activities.

Nadine was appointed as Race Correspondent at national news brand The Independent in early 2021 and remains the only person in the country to hold that title.

Her work has uncovered racial disparities in unemployment levels and homelessness, exposed surges in Anti-Asian hate speech and has examined how the UK education system impacts people of colour.

She joins Birmingham City University and will provide valuable insight and contributions to its Sir Lenny Henry Centre for Media Diversity, which was set up to examine and champion diversity in the UK’s media.

Speaking about the announcement, Nadine White said: “Through this role, I look forward to helping to nurture a new generation of talent.

Birmingham City University has one of the most diverse student bodies in Britain. Diversity is beauty and it is strength.

Before joining The Independent Nadine worked as a Senior News Reporter at HuffPost, joining the online publication following roles at both The Voice Newspaper and SW Londoner.

A celebrated reporter, Nadine was named on Forbes’ ‘30 Under 30’ Europe list in 2020, was named Best New Journalist at the Amnesty Media Awards in 2019 and has been shortlisted for the prestigious Paul Foot Award for her investigative work.

A quote from Nadine has adorned the walls of the University’s HuffPost Centre for Journalism since it opened in 2019.

Dr Sarah Wood, Head of Birmingham City University’s Institute of Media and English, said: “As the UK’s first and only Race Correspondent, Nadine is playing a vital role in championing the voices of underrepresented communities.

“Her career achievements will be a real inspiration to students across our media courses, and they will benefit greatly from learning from her experience, expertise and insight.

“Welcoming Nadine will also be a huge positive for our Sir Lenny Henry Centre for Media Diversity, and will help us make even greater strides in ensuring the media reflects our wider society.”