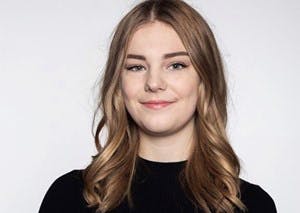 Final year Media and Communication student Alexandra Morgan has received the Charles Parker Gold Award for 2020 for her programme ‘This Ain’t My Life’.

Due to the coronavirus outbreak, the full results of the Charles Parker Award 2020 cannot currently be published. BBC Radio 4 will be broadcasting the five top submissions in their New Storytellers strand later in the year.

The selection of the five programmes to be honoured in this way falls to Radio 4 and has been slightly delayed, although the Charles Parker Archive Trust hopes to be able to celebrate all five successful candidates shortly.

However, the Charles Parker jury has selected its seven shortlisted programmes and Gold Award Winner for 2020.

Winner Alexandra’s programme was a raw piece of campaigning journalism centred on one homeless man, Kane, who died on the streets of Birmingham. One judge said she’d had a “very immediate connection”, describing the material as “well-researched, cleverly edited, urgent and important”.

“This presenter is a real talent”, commented a second judge, stating: “the writing, presentation and authorial voice are a cut above all the other entries. And the forefronting of the incredible, heart-wrenching piece of audio where Kane shouts “this ain’t my life” is reassuring of a producer who knows what they’re doing”.

The programme was described as “non-judgmental and doesn’t deal with homelessness as a ‘problem’ but confronts it head-on as part of lived experience”. It was, concluded another judge, “powerful and authentic, a ballad/tale of our time”.

Among the seven nominees is BCU Media and Communication (Radio) alumna Charlotte Hurrell, who graduated last year, for her piece ‘Anything Goes in Holbeck’. Judges described her work as “a bold, brave piece of investigative journalism” that was “well-researched” and “involved tough reporting on a difficult subject”.

Charlotte has also been named as a finalist in the 2020 New York Festivals Radio Awards in the ‘Best Student Documentary’ category for the same piece of work.

Associate Professor in Radio Production Sam Coley said: “Although we’ve previously had students nominated as finalists, this is the first time the University has had a student win first place in this prestigious award.

“The competition is tough, and the fact that Alexandra produced this documentary while in her second year of study is particularly impressive. I’m delighted Charlotte’s efforts have been recognised in the Charles Parker awards too.”

The student’s radio documentary will be broadcast on BBC Radio 4 at 13:45 on Friday the 14th August.