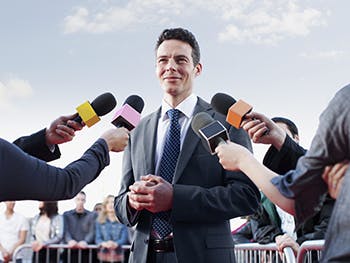 Senior lecturer in PR, Kelly O’Hanlon, questions the news of NHS plans to feature celebrities in a major campaign persuading people to take a coronavirus vaccine.

Celebrities have long been used to front promotional campaigns and lead advertising messages because of their pulling power. They may be seen to lead glamourous, enviable lifestyles or we may admire their work, what they stand for and the values they embody. Celebrities are ever-present and perhaps that’s why it doesn’t come as much of a shock that the NHS wants to tap in to some star power when convincing the public to take up the coronavirus vaccine when it becomes available. Working with a well-known face has been a tried and tested way to engage with a large of people for a long time.

However, the allure of celebrity has lost its shine somewhat in recent years, in part due to the rise in reality stars and others who seem to be famous just for being famous, in part as a result of increased cynicism when it comes to their promotional partnerships, but also at a time where influencers have risen in popularity.

Some influencers are of course those that have found fame through TV or other endeavours, and have become a form of celebrity in their own right, but others may have a smaller but highly engaged following. Micro influencers, those with combined social media followings between 1,000 and 100,000, may have a specific niche, be it their interests or the content they share from their life-stage, and this presents an interesting way for brands and organisations to effectively reach targeted audiences. It can be more cost-effective but more than that, followers have a unique trust in those they choose to follow. It’s a relationship built over time and when you feel you can relate to an influencer, because they are similar to you or they lead a recognisable lifestyle, you buy in to them and actively engage and support what they share and suggest.

A campaign such as the one proposed by the NHS could do well if it considered influencer engagement as a means to reach specific demographics and help the message resonate in a more relatable way. There have been many studies over the past couple of years that indicate the power of the influencer, in boosting sales or informing decisions, and some that suggest they are trusted to a far larger extent than traditional celebrities and even the media itself.

PR students were quite cynical about the NHS using celebrities to support their campaign when discussing this with them, saying that for such an important and serious issue, they wouldn’t hold much stock in what a famous face had to say; they would be more influenced by what experts, doctors and their own mum advised. Notice how the announcement said they were considering ‘sensible celebrities’ to work with; choose the wrong person, and your whole message can be undermined. Just look at Rita Ora – in the summer she sported a ‘stay at home’ t-shirt, yet now she has had to pay a fine for breaking lockdown restrictions and throwing a party for her 30th birthday at a restaurant with 30 friends, brazenly flouting the rules for all her followers to see. No brand or organisation wants to be associated with someone that has acted questionably, and an assessment of resonance and reputation will be key in selecting the right people to spearhead the campaign.

Good PR campaigns raise awareness, but great ones encourage engagement and inspire action. To truly affect change, an NHS campaign will need to develop a range of tactics to get a consistent message into circulation, to back it up by clear and understandable evidence and to convince people, over time, that they should act now to protect themselves and others.