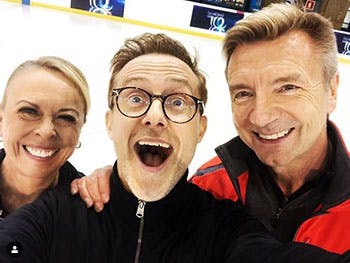 Media lecturers Kelly O’Hanlon and Dr Gemma Commane discuss the news that ITV will make history by having the UK’s first same-sex dancing couple on ‘Dancing On Ice’.

“The news that ‘Dancing On Ice’ is making history by having the first same-sex couple on a show of this kind is timely,” says Kelly O’Hanlon, senior lecturer in PR at Birmingham City University’s School of Media.

“It could be seen as a wise move, as we as a society move towards greater representation and therefore expect to see more inclusivity on our screens.

“Certainly, having Ian ‘H’ Watkins join the new series with a male professional partner is a step in the right direction, but the question is, are the producers really being responsive and responsible, or are they just paying lip service to an issue which deserves due debate?”

Steps star, ‘H’ will be paired with professional skater Matt Evers when the new series of ‘Dancing On Ice’ airs in January.

“Someone was going to have to go first and the speculation around whether ‘Strictly Come Dancing’ were going to be making the same announcement has garnered great interest, which is obviously great news for all broadcasters involved,” added O’Hanlon.

“And in this, we may find the real reason for the decision; ‘Dancing On Ice’, and any other programme that proposes to make such a change to their programme format, is bound to see a boost in their ratings, either from those keen to welcome in the new approach or those who feel it’s unnecessary. It does change the rules, and challenge our wider conceptions of representation and fairness, so I expect there will be a storm brewing no matter how well it is handled.

What the programme producers must do is avoid making a spectacle of the same-sex couple, otherwise they could be skating on very thin ice with both supporters and opposers to this very issue.

Dr Gemma Commane, lecturer in Media and Communication at Birmingham City University, says it’s important to question what this ‘Dancing On Ice’ change really means and the conversations it will create.

“Although it’s timely for ‘Dancing On Ice’ to have a same-sex couple, it’s important to understand that decisions are political and have economic reasons,” said Dr Commane. “In this case, examples could be sustainability for the television show, maintenance of the brand and audience expectations.

“We need to carefully think about what privilege means and what privilege looks like. Privilege is complex and it does not simply connect to one aspect of a person’s identity.

“Whilst it is fantastic that changes are happening, we need to ask: what do these ‘changes’ actually mean when certain voices and identities are still rendered invisible?

“Lesbians are often overlooked or are subject to ‘tragic’ storylines and they are given less space to occupy, especially in primetime television. Why aren’t lesbians the default when it comes to ‘ground breaking’ decisions when introducing same-sex coupling in shows like ‘Dancing On Ice’? What would it mean for ‘Dancing On Ice’ to have a lesbian celebrity skating with a same-sex partner? What types of conversations would arise from the media and audiences around this selection? If this had been the case, it would have been interesting to observe how news organisations would respond to an announcement like this and if they would write about the lesbian celebrity in predictable and fetishistic ways.”