Jazz and the media 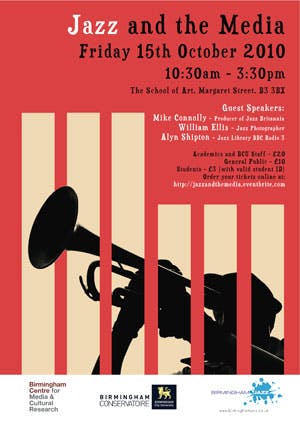 Three big names form the world of jazz will be visiting Birmingham to talk at Jazz and the Media, a seminar organised by Birmingham City University’s Birmingham Centre for Media and Cultural Research, in partnership with Birmingham Conservatoire and Birmingham Jazz.

Mike Connolly is an award-winning documentary filmmaker with over 10 years experience in factual and arts television production. Most recently he created the successful ‘Britannia’ brand for BBC4 including Jazz Britannia and Folk Britannia.

Connolly started his career in television working on the arts magazine programme The Late Show as a Researcher and Assistant Producer. For six years, Connolly worked as executive producer in the BBC’s Music Entertainment department working on programmes such as Oasis Right Here Right Now (BBC1, 1997), Reggae: The Story of Jamaican Music (BBC2, 2002), which won the Screen Nation award for best music programme, and Paul Morley's Pop! What Is It Good For? (BBC4, 2008).

During his time working for the BBC, Connolly produced over 20 documentaries about music, history and the arts. Jazz Britannia is widely regarded as one of the most comprehensive programmes ever produced on the subject of jazz in Britain.

William Ellis is at the vanguard of music photographers and is widely recognised as having created an important document of the contemporary jazz scene in Africa, Europe and The Americas.

His contribution to the culture was recognised by the American Jazz Museum in Kansas City when he was invited to produce the Inaugural International Exhibition in 2005, and where he returned in 2008 to present his work in the 'Jazz in Black and White: Bebop and Beyond' exhibit.

William's work has been exhibited at international festivals and galleries in the U.K. and throughout the world including The Royal Academy of Arts London, Amsterdam, Bremen, Cape Town, Havana, The Hague, Las Vegas, Los Angeles, New York City, Orlando, Toronto and Utrecht.

Ellis serves on the committee of the Milt Hinton Award for Excellence in Jazz Photography. His images have been used in the JAM (Jazz Appreciation Month) Outreach program in the United States initiated by the Smithsonian Institution and many of his pictures are in private collections worldwide, including those of the musicians with whom he has worked.

Alyn Shipton is an award-winning author and broadcaster, who is jazz critic for The Times in London, and a presenter/producer of jazz programmes for BBC Radio. He was Consultant Editor of the New Grove Dictionary of Jazz, and has a lifelong interest in oral history

His monumental New History of Jazz, published in 2001, was Jazz Journalists Book of the Year, and won Alyn the coveted “Jazz Writer of the Year” title in the British Jazz Awards. In 2003 he won the Willis Conover / Marian McPartland Award for lifetime achievement in Jazz Broadcasting.

As a broadcaster/presenter, Shipton presented the Jazzmatazz programme for BBC World Service for six years. During this time he interviewed well over 200 jazz musicians. He currently presents and produces Jazz Library for BBC Radio 3. Shipton obtained a PhD in music history at Oxford Brookes University and currently lectures in jazz history at the Royal Academy of Music, London.

For tickets and prices please go to: http://jazzandthemedia.eventbrite.com