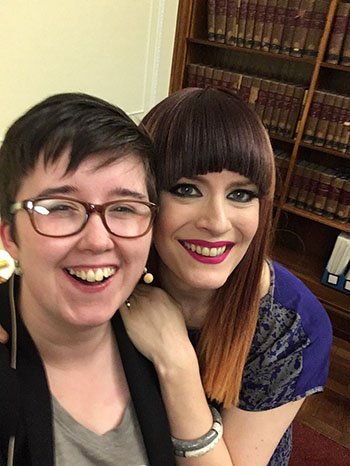 Dozens of people gathered at Birmingham City University today (Wednesday 24 April) to pay tribute to the ‘inspiring’ former student Lyra McKee who was shot and killed during riots in Northern Ireland.

A special vigil of remembrance was held in honour of the investigative journalist at the University’s City Centre Campus.

The vigil was organised by Pauline Roche, a postgraduate student on the University’s PG Cert in Data Journalism and a student member of the NUJ, as a mark of respect to the 29-year-old, after she was ‘caught in the crossfire’ when a gunman fired shots at police during rioting in Derry-Londonderry.

He said: “Lyra McKee had a talent for inspiring people. In 2012, when she first approached me about becoming a distance learning student on my MA course, I was inspired by her obvious passion for journalism.

Lyra was very conscious of her position as an ‘outsider’ in so many ways: it was part of what made her a great journalist, and a wonderful person.

I’m devastated by the news of Lyra’s death. I loved working with her. She was tenacious, a fighter, passionate about journalism, and full of love for her family and partner.

“She had worked for a decade to get to a good place, and we had been talking about what she could do from that place.

“I’m angry that we’ll never get to see what she would have done next, so I watch that video, thinking about what she achieved in those 10 years, and how happy she was. And I will miss her.”

Students and staff from Birmingham City University joined the vigil to pay their respects alongside journalists and members of the public from around the region.

“Birmingham School of Media was fortunate to have played a small part in helping Lyra to realise her ambition to become a world class media professional and we are extremely sad that her life has been cut tragically short.

“Staff and students hold Lyra’s partner, family, friends and colleagues in our thoughts at this very difficult time.”