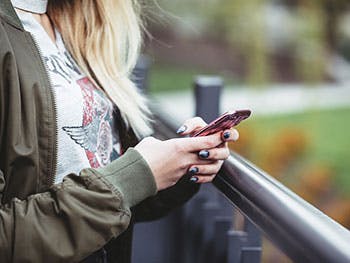 A group of Birmingham researchers have conducted an in-depth study on young people’s educational needs surrounding the phenomenon of sexting, with findings suggesting that improved support needs to be provided.

The study, led by Birmingham City University, is the first of its kind to focus on the expressions of young people on the types of support, intervention and sexting education that they need.

Undertaken by health, media and education academics at Birmingham City University and University of Birmingham, the research looked to address the absence of young people’s voices in the creation of sexting interventions and to create recommendations for schools.

The term ‘sexting’ is generally understood as the sending of self-generated and sexually explicit messages, images or videos using mobile phones or other electronic media.

“We only had an assembly, but it only showed us how a girl was bullied after”, a female participant said.

“It never told us why not to do it and if it’s illegal”, she added.

Students felt strongly that school assemblies were an ineffective way of disseminating information about sexting, repeatedly stating that “no one listens in assemblies”.

Both male and female participants felt that boys tended to be the recipients rather than the senders of nudes, and that boys were more likely to “force”, coerce or pressure girls to send them nudes.

Boys were not believed to be coerced into sending nudes, but sent them to be “silly” or “act cool”.

Some participants made a distinction between popular and unpopular students, stating that popular students face milder consequences if they had a nude leaked, especially if the nude was deemed flattering and attractive.

“Examples included sharing naked images within friendship groups to gain reassurance that their body was normal, sharing a nude as an expression of body confidence, and sending nudes as a means for creating intimacy and establishing trust within a romantic relationship.”

The study found that students weren’t comfortable seeking support from parents of teachers, but instead would prefer speaking to someone “who you don’t see every day”, such as a youth worker, a school nurse or an older student mentor.

The majority of participants felt that the police shouldn’t be informed about the sharing of student nudes, as they had “better things like murders to investigate”.

The researchers hope that the study will encourage schools to involve young people in the development of their educational approach to sexting.

“A key recommendation from the study would be for schools to consider carefully the forum in which materials on sexting are presented, the methods by which it is communicated and the way the varied motivations for sexting can be acknowledged”, added Dr Weckesser.

As trust is a key issue for young people in discussions of sexting, schools and colleges need to consider both how trust can be strengthened and how confidentiality is communicated and practised.