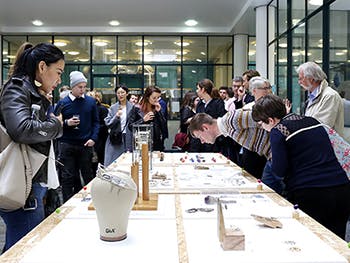 The School of Jewellery recently joined with key members of the jewellery industry to celebrate the work of graduating students as part of the Inspired Festival.

The graduate show demonstrates the School’s strong and longstanding links with businesses within the Jewellery Quarter as well as with international companies through the number of sponsored prizes given to students across all disciplines.

BA (Hons) Horology student William Daw took home two of the awards from the evening, including the Antiquarian Horological Society Award and Christopher Ward Prize for Technological Exploration, both with substantial prizes. Kester Crockett won the LVMH Group Horology prize for the best performance over all three years of the degree.

For BA (Hons) Jewellery and Silversmithing – Design for Industry students, Fabulous Futures awarded £200 mentoring support with work experience for a student. Huub Boekhurst was given three awards for their work, including a place on the Getting Started Business course from the Goldsmiths Company.

Fellows and Sons awarded a prize to Emily Jones from BSc (Hons) Gemmology for the best student in jewellery valuation, which included a £250 prize.

The event attracted many of the “Greats” of our specialist fields drawn by the unique nature of our School and the high quality of our students’ work, and we are very grateful to our industry friends for their generosity and ongoing support.

"The evening is not only a chance to celebrate the fantastic work of our students, which has been widely applauded this year, but also provides a brilliant opportunity for them to network and meet potential employers. Many successes and much to celebrate.”