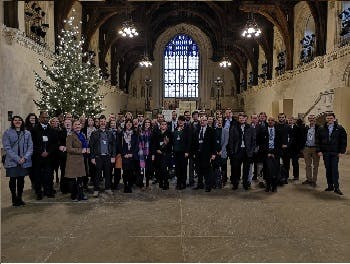 Ashok Patel from Department of Life Sciences at BCU will be swapping a lab coat for legislation when he visits Steve McCabe MP at the House of Commons for a week in Westminster. The week (26 - 30 November) is part of a unique pairing scheme run by the Royal Society – the UK’s national academy of science, with support from the Government Science and Engineering (GSE) profession.

During his visit, Ashok will shadow Steve McCabe and learn about his work. As well as attending seminars and panel discussions about how evidence is used in policy making, Ashok will also attend a mock Select Committee.

The visit will provide Ashok with a behind the scenes insight into how policy is formed and how his research can be used to make evidence-based decisions. It will also give Steve McCabe the opportunity to investigate the science behind his decisions and improve his access to scientific evidence.

Ashok's main research focus involves identifying the genes involved in causing diabetic kidney disease and dementia in order to aid the development of possible treatments. He also has a keen interest in Science, Technology, Engineering, and Mathematics (STEAM) initiatives and believes in the arts as a way to cause positive societal change by demonstrating science.

I would like to discover more about the role of science in policymaking in Government. This scheme will give me a better understanding of how scientists can communicate with politicians and help shape scientific strategies for the benefit of society. It will help me to better understand the role of Ministers, MPs and Civil Servants in influencing scientific policies.

Conversations between researchers and policy-makers are incredibly important to ensure we make the best decisions and find new ways to tackle problems. I’m excited for Dr Patel to join me in Westminster and looking forward to the reciprocal visit to Birmingham City University.

The Royal Society is a self-governing Fellowship of many of the world’s most distinguished scientists drawn from all areas of science, engineering, and medicine. The Royal Society’s pairing scheme, which started in 2001, aims to build bridges between parliamentarians, civil servants and some of the best scientists in the UK.

Mr McCabe will get hands-on experience of research across the University, including the faculty of Health, Education and Life Sciences when he dons a lab coat to visit Dr Patel at Birmingham City University next year.