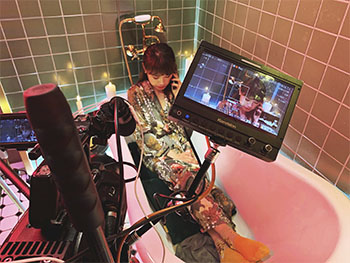 MA Film Distribution and Marketing graduate Murong Wang recently celebrated having her work selected for the Soska Sisters International Women in Horror month of film screenings. Her finished short has already received lots of positive publicity and an official endorsement from the Soska Sisters themselves.

The Soska Sisters (Jen and Sylvia Soska) are a strong dynamic duo best known for directing, producing and screenwriting often violent and visceral horror movies such as American Mary and Rabid. Every February they invite filmmakers and feminists from across the world to celebrate Women In Horror Month (WIHM) by creating short public service announcements (PSAs) encouraging blood donation.

Murong was invited to make a PSA for WIMH month after keeping in touch with the Sisters following their visit to Birmingham City University for the 2019 Cine-Excess Festival. The Festival included a Tales of Terror competition where students pitched horror films to the Soska Sisters.

Xavier Mendik, Professor of Cult Cinema Studies and Director of the Cine-Excess International Film Festival commented: “Murong was one of the students that won the film pitch competition the Soska’s judged during their 2019 visit to Cine Excess, so it’s very positive to see that this has generated a further film project and the potential for such high level mentoring”.

Murong’s film journey started at the age of 16 and she sold her first feature film script in 2015. The film was released in 2016, with Murong also credited as Casting Director and Assistant Director. She went on to study Screenwriting and Directing at the Shanghai Theatre Academy, and during that time she made another feature film called which details the devastating effects of the drug business. Murong then moved to the UK and applied for a master’s degree in Film Distribution and Marketing at BCU, looking for more opportunities to gain experience in film industry. Her third feature film was released on Tencent (a popular Chinese streaming platform) in 2019 and got 25,000,000 hits in its first week. It reached first place on all major Chinese streaming platforms.

Murong’s winning PSA, tells the story of a young girl who finds herself in a bad situation and sees no future. The film synopsis adds that “she’s fighting both the demons in her head and in her life. Her mom’s words crush her. All she wants is a restart.”

Murong noted how meaningful the opportunity to create a film for the Sisters was and how grateful she was to be part of WIMH:

The Soska Sisters are so nice, they gave me lots of encouragement and gave me more confidence in filmmaking. They are willing to help new film makers like me and I can’t wait to be working with them again!

To find out more about the opportunities available on our Film courses visit our course pages.