How we made the costumes for Birmingham 2022 festival

Some of our highly talented costume design students recently worked on creating outfits for the opening show of the Birmingham 2022 Festival, Wondrous Stories. The festival marks the start of festivities revolving around the Commonwealth Games, which will be held in Birmingham later this summer.

Wondrous Stories is a production created by Leamington-based dance company Motionhouse and features 322 costumes, 22 aerialists, and a strong community cast of over 250 people. The students worked alongside lead costume designer, Sophie Donaldson, to create 22 different costumes for the performance.

We sat down with some of the costume design students that worked on the pieces – Jack Slater, Ella Gridley, and Simron Sabri. They gave us an insight into how they designed the costumes and their experience working on such a large-scale production.

Tell us about how you got the opportunity to work on Birmingham 2022 Festival.

Jack: At the end of last summer, we were told that we were going to be working with a huge company, but it was all very secretive. We were told it was related to athletics and so to research athleticwear, and a few months later the university told us that is would be for the Commonwealth Games. It felt like a huge honour!

Ella: The University was approached by Kevin Finnan MBE, director of Wondrous Stories, and the project became the focus of two of our final year modules. The opportunity was put to us in October 2021, when we were briefed on the project and the Birmingham 2022 Festival overall. We were also introduced to Motionhouse and the amazing work they do.

What were the first steps of the design process?

Ella: Historical and contemporary research. We began by researching Motionhouse as a company, what aerial dancers wear and Kevin’s vision of stories, with a particular eye on Birmingham. We were told we’d be making costumes for the entire cast, so researched traditional story archetypes to give characters to each performer. I chose an archetype called the sage and looked at old and wise stereotypes within stories and historical art pieces. I was able to find a recurring theme of draping and textures.

I looked heavily into Sonia Sabri’s work, traditional Kathak dress, and Kevin’s concept of Handmaid’s Tale-style costumes. As well as the Sage, I also ended up taking on a second character, the Flamboyant. For this character I looked to high street styles and trends of all over print. I merged these ideas with my peer Morgan Harrison’s recreation of Birmingham’s topographical map to create a Birmingham oriented print.

Simron: One of my clients was a spoken word artist, Sebbie Mudhai, and I had a brief to include a fusion of South Asian and African influences as well as bright colours. As a result, I researched traditional clothing, prints, patterns, and silhouettes. I was able to find similarities, such as South Asian and African prints often have circular shapes and have a lot of draping.

How did you come up with the ideas and how much input did you have?

Jack: We sat down as a team and everyone had different ideas, but we wanted to make all the different costumes look cohesive. I wanted to do characters that were based on Birmingham. I’m Brummie born and bred, so I knew I had to represent Birmingham.

Ella: We were able to have full control of the design whilst fitting within Kevin’s brief. My ideas came from my research; I ended up looking to Vogue magazine for contemporary inspiration and that is how I landed on my final designs. When we presented our final designs in December, we were given feedback from both Louise Richards (co-founder of Motionhouse) and Sophie Donaldson (costume designer at Motionhouse). Throughout, our designs were closely monitored by Sophie, making sure the costumes would be safe for the dancers to perform in, would fit Motionhouse’s regular style and that the outfits would be warm enough for wearing in March.

Simron: I looked at Sebbie’s previous poems and wanted to portray that through the costume. The more the costume had been developed, Sebbie realised she wasn’t as fond of it as she thought she would be - looking at sketches and wearing the costume are very different! We then had another meeting and decided to change the costume as her comfort and confidence on stage was more important, whilst keeping some elements of the costume such as the prints and bright colours. 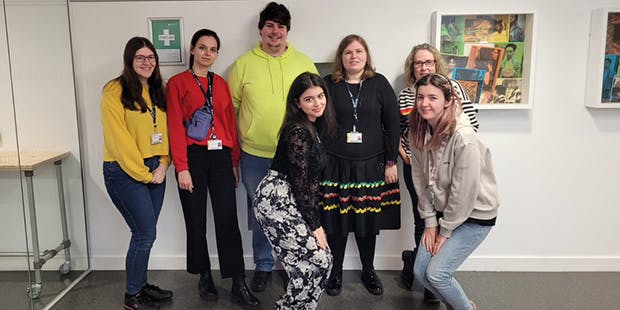 Did you have any setbacks during the process?

Jack: I was really set on having graffiti included in my outfit, because I’ve always loved the street art you can find around Birmingham, and growing up, I found it mesmerising. I was hoping to work with a local graffiti artist to create this, however unfortunately they never got back in touch with me. This was disappointing and disheartening but not necessarily a setback, as I was able to learn new skills and do it myself.

Ella: There were a few minor setbacks in terms of having to change our designs, however, these changes were necessary to ensure the safety of the dancers and to keep in the regular style of Motionhouse. This is when we learned to not stay attached to initial ideas. If it’s not right, it has to change to keep the client happy. With the Sage I had difficulty getting the fit right on the trousers. It is all part of the learning process but the trousers not being right at the final fitting is an undeniable pain!

How did you find the overall experience of working on Birmingham 2022 Festival?

Jack: I’m so proud to have worked on the Birmingham 2022 Festival. At the start of this project, I was nervous as I’d never done such a big production, but as the module progressed, I’ve felt more and more honoured and proud to be part of it. This is for Birmingham.

Ella: It’s been an honour being part of such a big production. The experience I have gained from this is invaluable and I’m grateful to have had the opportunity. Excited to see the rest of the festivities unfold!

Simron:I thought it was amazing and very insightful into the industry. If anything, it made me feel more excited to be working within costume.

What tips would you give to somebody working on a large creative brief?

Ella: Teamwork and communication are vital. Making sure the overall look is coherent requires give and take within a team, being able to adapt a design and not being precious about an initial idea can be what allows a project like this to flow smoothly. Keeping up communication and offering help where needed is great for group moral and keeping the pace going.

Simron: Enjoy every moment! It may seem daunting to be making costumes for a large mass of people, however it’s so much fun once you find your rhythm which you often find much sooner than you think. My biggest advice would also be to not take it personally if someone may not like your ideas as much as you do. Remember it is a collaboration and compromising and adapting is always important.