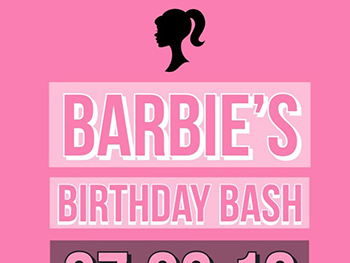 Students at Birmingham City University are hoping to raise £10k for youth homelessness charity St Basils with a series of fundraising events, including a celebration of Barbie’s 60th birthday.

‘Barbie’s Birthday Bash' takes place at The Village Inn at the heart of Birmingham’s gay quarter on Wednesday 27 March and is set to include retro Polaroid photographers, glitter make-up stands, pink drinks and prizes for attendees as the best dressed Barbie.

Created in 1959, Barbie manufacturer and American toy company Mattel Inc are said to have sold over a billion Barbie dolls worldwide in more than 150 countries.

For the first time in the company’s history, Mattel unveiled a range of Barbie body sizes in 2016 including curvy, tall and petite shapes. Earlier this year, new additions to the Barbie line-up included a doll using a wheelchair and another with a prosthetic leg.

“As it’s Barbie’s 60th year, we wanted to organise a fun event that not only celebrates diversity but feelings of nostalgia too,” said Laura Gater, who studies Fashion Business and Promotion at Birmingham City University and is one of the event’s organisers.

All of the money raised from the night will go to St Basils and towards helping homeless youths in the West Midlands.

St Basils works with over 5,000 young people each year who are homeless or at risk of homelessness, supporting them to regain stability in their lives and rebuild a fulfilling future.

Laura Arrowsmith, lecturer in Fashion Business and Promotion at Birmingham City University, said: “Each year our students do a fantastic job in raising funds for St Basils, as part of their Events Management module.

“This year is no different and it’s great to see our students organising events that will capture the attention of the public.”

Other events organised by students include dining in the dark at All Bar One and a Mother’s Day afternoon tea at Hampton Manor.

For more information on ‘Barbie’s Birthday Bash’ and to book tickets, search ‘Barbie’ at www.fatsoma.com.