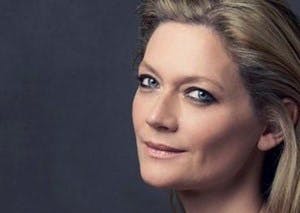 BCU alumna, author and actor Sophie Ward has made the longlist for the Man Booker Prize for Fiction 2020.

Sophie, who graduated from the Diploma in Writing, run in association with the National Academy of Writing, is on the list for her first novel, Love and Other Thought Experiments.

She joins previous two-time Booker Prize winner Hilary Mantel and 11 others on the longlist, known as the “Booker Dozen”.

The Prize is one of the most prestigious awards in the literary world, with the longlist selected by an expert panel of judges chaired by editor, literary critic and former publisher Margaret Busby. Previous winners include Margaret Atwood, Ian McEwen, Kazuo Ishiguro and Salman Rushdie. This year’s candidates were chosen from 162 titles published between October 2019 and September 2020.

Love and Other Thought Experiments is Sophie’s first novel and is told in ten interconnecting but self-contained chapters – each from a different character’s perspective. The novel is inspired by thought experiments in philosophy, particularly philosophy of mind, and is a story of love lost and found across the universe.

Sophie has previously published articles in several major newspapers and magazines, and her short stories have been published in the anthologies, Finding A Voice, Book of Numbers, The Spiral Path and The Gold Room.

In 2018, Sophie won the Royal Academy Pin Drop award for her short story 'Sunbed'. She has a degree in Philosophy and Literature and a PhD from Goldsmiths on the use of narrative in philosophy of mind.

‍The shortlist will be announced on 15 September, with the winner announced in November. The winner will receive £50,000 and can expect international recognition. The shortlisted authors each receive £2,500 and a specially bound edition of their book.

Love and Other Thought Experiments was released in February and is available at your chosen book store.