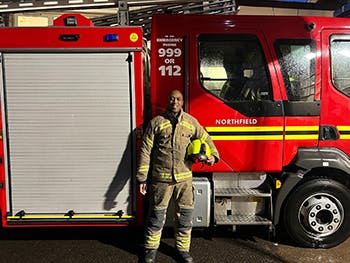 A fire engineering degree apprenticeship – the first of its kind in the UK – is growing its student and employer base to meet national demand for fire engineers and in line with new Government legislation.

The part-time Higher-Level Degree Apprenticeship in Fire Engineering, offered by Birmingham City University and developed in partnership between the National Fire Chiefs Council and the UK’s commercial fire engineering industrial sector, is a response to new Government legislation and recommendations and requirements for a workforce to address the shortfall.

The public inquiry and the investigations into the dreadful loss of life at Grenfell in 2017 identified a massive competency gap and an opportunity for people to acquire new skills in fire engineering across the UK, with the Government currently progressing a new Fire Safety Bill and Building Safety Bill through Parliament.

One of the UK’s first fire engineering apprentices received a boost to his studies after being invited to join a recent virtual call with Minister of State for Building Safety and Fire Lord Stephen Greenhalgh.

David Cooper, a firefighter based at West Midlands Fire Service’s Northfield station in South Birmingham discussed his career journey so far with the Minister, and how the apprenticeship programme has helped him to realise his career goals.

It has been a brilliant journey for me so far, and to speak with the Minister early in the course was a great experience. We're grateful that he gave his time to find out more about our work and to share encouragement. As with any challenge, I'd say to anyone considering this apprenticeship to grasp the opportunity with both hands.

The degree course is ideally suited to those currently working in the Fire and Rescue Service and in Fire Engineering consultancies, works to a national standard and employers can use the Apprentice Levy Fund to pay for the course, with students combining full-time employment with four years of part-time study to achieve a formal qualification.

Area Commander Steve Ball, of West Midlands Fire Service, said, “We’re proud to be partnering with Birmingham City University for this apprenticeship degree opportunity. West Midlands Fire Service is committed to reducing risk across our communities, and this includes a focus on the built environment. We wish Firefighter Cooper and his fellow students every success on their fire engineering journeys."

The majority of the first intake are mature students, who can often draw on in-depth experience and overlay this with the learning from the course to become more rounded and qualified professionals.

“Birmingham City University is now actively processing applications for the January 2023 intake of the Fire Engineering Apprenticeship Degree, heavily investing in building the team and in new lab facilities, partnering with other organisations to enrich the learning experience and developing opportunities for Masters and PhD students.”