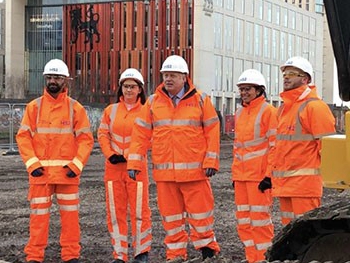 Deputy Vice Chancellor Professor Julian Beer has welcomed news that the controversial HS2 rail scheme will go ahead, and said the West Midlands region must now take advantage of the opportunities it presents.

After months of uncertainty, Prime Minister Boris Johnson confirmed yesterday (Tuesday) that the high-speed network would go ahead with trains from London to Birmingham due to start running by the end of the decade, and further extensions to the north of England following later.

Mr Johnson and Chancellor Sajid Javid visited the proposed new Curzon Street Station site - opposite our CIty Centre Campus - where he was interviewed by various media outlets, with BBC Midlands Today and ITV Central News broadcasting live from the site for their main evening news programmes.

Professor Beer said the decision had the capacity to bring jobs, skills and growth to the region, but that leaders needed to act to ensure that the benefits were maximised.

He said: “This announcement is a major step forward for a project of this size and scale, and we must now seize the opportunities it can bring to Birmingham and the wider West Midlands.

“Placing our region at the heart of a new transport network will help connect people to jobs, provide new roles for our students and bring businesses to this region, but the hard work starts now if we are to truly maximise these benefits.

“We have already seen major regeneration of this part of the city including plans to extend the Midland Metro and our own £340 million investment. But we also have a chance to further develop the city’s learning quarter to give students and businesses a home to be proud of, and transform the image of our city for the thousands of new visitors who will arrive here on the new rail line.

“HS2 is not just about shorter journey times, but is about the investment and regeneration it can bring here, and it is up to us to make sure it brings with it the benefits, which make sure this part of the country truly punches its weight.”