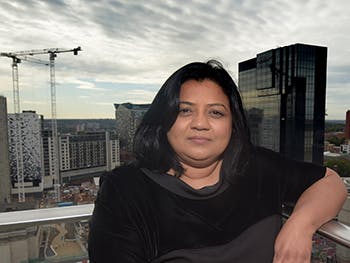 A Birmingham-based structural engineer who supported the 9/11 rescue effort in New York is to use the 20th anniversary of the attacks to share her experience with aspiring engineers at an online public event.

Asha Devi, recipient of an Honorary Doctorate from Birmingham City University, assessed and mapped routes for emergency services following the collapse of the Twin Towers in 2001, allowing rescuers to navigate safely through the rubble.

Now, two decades later, the city engineer and role model will talk about her work in the field at the ‘In Conversation with Asha Devi: Engineering and 9/11’ event, streamed live from the University at 1630 on Thursday 16 September and open to all.

Asha will use the event to promote engineering as a career choice for women and aspiring engineers from the BAME community in Birmingham and the West Midlands, and will also explore the role of engineering in placemaking across the world.

The Midlands is at the heart of many major engineering projects which are transforming the built environment. As we look forward to the Commonwealth Games in 2022, I am excited to see innovative and stunning venues, buildings and green spaces being created by very talented people in our region. I hope I can inspire people to consider the engineering professions, as these are exciting times for creating a more sustainable built environment.

The Birmingham-born engineer who works for renowned engineering consultancy, Ove Arup & Partners, has taken her skills across the globe including working with non-profit organisations in Africa, United Nations and overseas Governments.

She has also played a major role in her home city, contributing to key projects including the Water’s Edge Brindleyplace, Birmingham Children’s hospital and the Sea Life centre. Today she is project director on a range of public sector projects in healthcare, education and local government across the region and is based in Birmingham.

In 2018 Birmingham City Council named Asha Devi among 30 inspiring women whose uplifting stories were featured in the book ‘Once Upon a Time in Birmingham: Women who dared to dream.’

An active advocate of STEM activities in schools, Asha is a Governor for the BMET group of Further Education Colleges in Birmingham and a West Midlands regional board member of the charity Land Aid.

In January 2020, she was presented with an honorary doctorate from Birmingham City University during a special ceremony held at Birmingham’s Symphony Hall, alongside students graduating from the University’s Faculty of Computing, Engineering and the Built Environment.

Tickets for ‘In Conversation with Asha Devi: Engineering and 9/11’ are available here