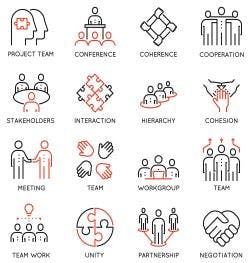 A recent systematic review suggests that professional bodies have a value in guiding or shaping the work of educational researchers, citing evidence from research around the value of being involved in events and conferences organised by professional bodies. An international study indicatse the value of a supportive environment of network specifically created for postgraduates in nursing. Further international research with undergraduate students outline a  ‘continuum of involvement’ with professional associations where networking with others who reflect the values of their future work.  Beyond this, there is a gap in the literature about the value of professional bodies to doctoral education, which this blog aims to address. It shares a journey plot to indicate my learning across these different domains and the value to me. I argue that this was an important part of my doctoral journey which is not always apparent or visible beyond the award of my doctorate. I finish with some provocations about how we could make the invisible, visible.

Lee et al., propose that he ‘hybrid’ curriculum of the professional doctorate  extends the idea of the doctorate as a research apprenticeship to the modern doctorate which recognises learning across different domains or spaces beyond academia (e.g., workplace, professional, personal).  The ‘hidden’ curriculum of doctoral education by (Elliot et al., argues that there is value in the unofficial channels of genuine learning which are acquired beyond academic foundations.  Both concepts propose the involvement of the professional association or learned society, but the research on the value of this is limited. A handbook for supervisors argues that the focus on wider candidate needs is important in a marketized policy arena where the doctoral can be perceived as a qualification for the development of skills for the knowledge economy, with a focus on completion rates. This could mean that the involvement of the professional association in the progression or transformative growth of doctoral researchers (e.g., identity, professional development, socialisation or changes in world view) is invisible or not necessarily deemed as valuable. They argue that drawing on the support beyond the walls of academia is important for candidates, supervisors and those involved in delivering doctoral education learning programmes, to offer a personalised approach to doctoral learning.

Research highlights how completing a doctorate can be a challenging experience despite candidates emanating from competent academic backgrounds. However, this was not the case for myself. When I started the EdD in 2012 I was a part-time, mature student who lived 70 miles away from my university. At that time, the physical and mental health of my parents was already in decline, which created a lot of ‘background noise’ during the lifetime of my EdD. By 2014, I realised that I would like to have a career in research and took it upon myself to engage in what my practice background would call ‘extra-curricular’ activities. I realise now as I reflect, using these models as a lens, that I was drawing on the hybrid and hidden curriculum to support my developing identity and ‘becoming’ a researcher, but did not realise this at the time. A study of doctoral learning argues that it is important to illuminate positive experiences, as opposed to negative experiences and this is welcomed and important if the idea is to secure ‘learning for all’. I had many positive experiences from engaging with professional associations and I agree with Gardener & Barnes in their study of undergraduate students that I have had a ‘continuum of involvement’ with others that reflected my values for my future work (see p8).

As I have reflected on my journey and the learning that took place during my doctorate, I have explored the module handbooks I received from my institution and the EdD states that the qualification operates across different spaces where the learning is ‘distributed’ between the university, the workplace and professional associations. The handbook depicts this model drawing on the work of Lee et al. who emphasis that for the professional doctorate is imagined as:

A three-way model, where the university, the candidate’s profession and the particular work-site of the research meet and intersect in specific and local ways. (Lee et al. 2010 Page 127)

The Staffordshire University EdD programme handbook informed how the learning on the EdD was ‘distributed’ across different spaces:

‘The University shares learning space with the practitioner’s work place and professional association(s) according them equivalent status as sites and relations of knowledge production and validation.' 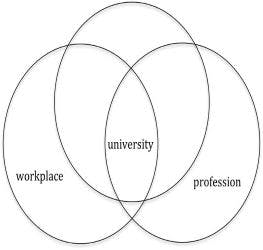 The handbook then included this model, on the right, which was adapted from Lee et al.

Elliot et al. (2020) outline a similar concept which takes this beyond the EdD to doctoral education in general. They draw on the university ecology models of Ronald Barnett to depict a doctoral learning ecology model which operates over four learning spaces or domains: Discipline, Institution, Person and Workplace. They also outline the aspects that form both the ‘formal curriculum’ and the ‘hidden curriculum’ this includes:

In this blog post I am combining these concepts to argue that whilst my journey started on an EdD programme underpinned by the ‘hybrid’ curriculum, I feel that the ideas also have value to PhD candidates through the concept of the ‘Hidden’ curriculum and combined this underpins this blog post as the start to this conversation.

My involvement in the ‘hybrid’ and ‘hidden’ curriculum

I attended many events and activities across the formal and informal curriculum both within the university such as events through the Doctoral Research College, EdD modules, interaction with my supervisors, internal and external PGR Symposium and Conferences, learning across our EdD cohorts, peer learning and informal discussions. I also joined professional associations, firstly joining the British Educational Research Association (BERA), then the Society for Research in Higher Education (SRHE), then the British Sociological Association (BSA) and the British Educational Studies Association (BESA).

There was also also a lot of ‘background noise’ that formed part of my journey such as being made redundant, being a precarious researcher and having a parent go into care. In this blog post there is not the space to cover all of these aspects, so here I am just focusing on my ‘continuum of involvement’ with BERA since 2014 and the value of this to my journey.

In December 2013, the Award Leader of the EdD programme emailed my cohort about joining BERA. I started to explore BERA and then joined. In January 2014, the Award Leader emailed to ask our cohort about presenting at the BERA 2014 Conference in London and from this I submitted an abstract. I started to receive BERA Newsletters and found out about the BERA Postgraduate Forum and I signed up to a PG Symposium in June 2014.

Presenting at the BERA Postgraduate  Forum Symposia in June 2014 was a useful experience. It was a small group of Postgraduate with two discussants including well renown academics. One person came from my university, but the others were from other universities. We presented about issues or questions we had around our studies, rather than the results. One person was exploring the history of school PE and accessing an archive in Wales which included exploring old photographs, which she shared with us. Another candidate had experienced continually changes to her supervisory team and it was just interesting to hear of these experiences. One person I met there, we then continued to see each other at conferences – up until the pandemic and it was just useful to have met someone and then see their development, through their doctorate and beyond. The symposium allowed an opportunity to form those lasting connections and networks.

The award leader offered a session on conference preparation ready for the BERA Conference. Whilst at the conference I attended two Special Interest Group meetings and this led to me reviewing abstracts in January 2015. This was a great opportunity to practice my critical reading.

In 2015, I was still in precarious employment and I attended the launch of the BERA Independent Researchers Forum in London. I met an academic who it turned out was a good friend of my supervisor and then ended up taking over as the EdD Award Leader at my university and was eventually my internal examiner.

This positive experience of being involved in the PG Forum led me to apply to be a Convenor myself and with this the opportunity to lead my own symposium. I organised this through my supervisor and it took place at Staffordshire University in June 2016. The event was attended by doctoral candidates from different universities from England and Scotland. One candidate had nearly finished their doctorate and was concerned about a new candidate undertaking a similar topic area. There was also a candidate from a university who I then re-met when I joined the Executive Committee of BESA in 2018 and I have now taken over the role of Editor of a Journal from this person.

I have discussed here only a snapshot of my involvement in BERA and more can be found in my ‘continuum of involvement’. The value of these events is in many ways serendipitous but they were nevertheless beneficial to me along the doctoral journey, but are hidden. Elliot et al. (2020: 142-143) outlines questions for their readers to reflect including: How can doctoral supervisors guide their doctoral researchers to harness learning in these different spaces? As outlined the EdD programme and my supervisor did this in terms of the ‘hybrid’ curriculum, but perhaps this is not the case across all doctoral programmes. They also ask: ‘How can higher education institutions encourage harnessing of the hidden curriculum?’

My question to you is: How can we share the value of professional associations in terms of the ‘hybrid’ or ‘hidden’ curriculum of doctoral education? I hope that my sharing my experiences and future research in this area could help to uncover this value which appears invisible.