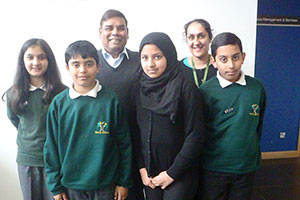 Birmingham City University has proudly hosted another sitting of the Handsworth Young People’s Parliament, an initiative for children from 28 local schools which the University has been supporting for over five years.

The Parliament encourages young people to become active citizens within their local communities by enabling their opinions on important issues to be heard. We believe initiatives such as this are a key part in engaging young people, encouraging their development and giving them a way to feel that they can engage and be involved in the political world.

Pupils were welcomed into the University community, and received talks from academic staff such as Head of the School of Education, Kevin Mattinson, as well as MPs such as Shabana Mahmood.

We are very proud of our growing collaborations and partnerships, and hope to continue to support events such as this for many years to come.