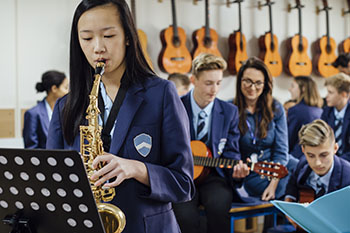 A study by Birmingham City University has revealed that young people are less likely to take an A-level qualification in music if they come from deprived areas.

School of Education and Social Work

Findings reveal that 60 per cent of A-level music entries came from schools in postcodes with POLAR ratings of 4 or 5 – a rating that indicates a high proportion of 18 year olds in the area study at university.

The project, commissioned by the Royal College of Music and the Royal Academy of Music, investigated changes in the demographics and uptake of A-level music over a five-year period.

Over 20 per cent of these A-level music entries were clustered around fewer than 50 schools.

The study also revealed that many of the local authorities that routinely entered small numbers of candidates for A-level music qualifications are among those in the most disadvantaged areas of the country.

Dr Adam Whittaker said: “The significant decline in A-level music is extremely alarming. It is deeply worrying that students in the most deprived local authorities are not able to study A-level music, while other more affluent areas see high numbers of entry.

The threat of small class sizes is also a concern. In a tough financial climate, it can be hard for schools to justify the expense of offering a qualification and having a specialist teacher if the uptake is low, further limiting pupils access to studying music and even pursuing a career in music.
Dr Adam Whittaker

This comes as another study by Birmingham City University revealed that music education can help keep disengaged young people in mainstream school.

Dr Victoria Kinsella, who was involved in both research projects, said: “We know how important music education is, both for those who want to pursue a career or further study in music and young people who may not be engaging with the curriculum.

“These findings highlight a concerning trend. Music education should be available to everyone, regardless of where they live.”