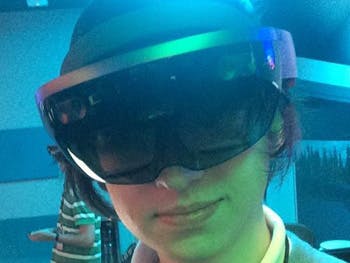 At the start of his second year at Birmingham City University, Liam Sorta was informed of an opportunity to become a 'Microsoft Student Partner' (MSP), which involves acting as a Microsoft representative at a university. After applying, he was delighted to find he was accepted onto the programme. He found that the experience resulted in what he describes as “far more than a new line on my CV”.

As a Microsoft Student Partner, Liam jumped into his role as the on-campus rep, running workshops and tutoring sessions for other students. He helped to organise two University hackathons, secured sponsorship for the yearly Global Game Jam competition and was made chair of the MSP funding committee MSPF. He was later appointed the Regional Lead for West Midlands for the ability he displayed throughout the programme. The experience with the funding committee gave Liam vital information on what is required to receive sponsorship funding for projects, as he knows what people are looking for in a bid, and what makes an application an attractive option for a business.

In summer 2016, Liam was invited to attend the Microsoft Student Partner Worldwide Summit in Seattle, Washington. He was one of just four UK MSPs selected for the event, representing over 150 students from the UK.

During the summit, Liam had the unique opportunity to experience Microsoft’s Augmented Reality venture, the Hololens, an experience which few Microsoft staff have had yet. While at the summit, MSPs from all over the world heard speeches from Satya Nadella, CEO of Microsoft and Steven Guggenheimer, Microsoft Chief Evangelist. They also attended an event at a local secondary school to inspire and encourage the next generation of programmers.

The summit was a fantastic opportunity for personal and professional development. Liam met senior Microsoft engineers and was able to talk to them about their experience and background, as well as getting advice on how to progress in his career. The experience had tangible benefits too – towards the end of the programme, all attendees were surprised with a personal gift from Microsoft, a high-end Surface Book, the newest iteration of their popular Surface laptop range.

Liam says of the experience:

Being an MSP has been an invaluable experience both educationally and professionally. The programme very much supports a philosophy I've been mindful of since starting University, ‘You are responsible for creating your own success’. With dedication, discipline and a true passion for what you do, anything is possible.
Liam Sorta

The Microsoft Summit was not Liam’s first international experience since joining Birmingham City University. At the end of his first year, he won a scholarship to study at Hanyang University in South Korea. It was his first time travelling outside the UK, and he admits that his mother was a little wary about him going! He attended daily classes in C++ and project management. At the weekends, he had the chance to explore the culture of the city and even pick up some of the language.

Liam is now working at Birmingham City University for his placement year in the Computer Games Technology (CGT) Department, and will return as a student for his final year in 2017. Here he will be conducting academic research for the University and assisting students in lab sessions. He will be working alongside the CGT course leader, Andrew Wilson, who organises the yearly Global Game Jam competition. Liam is grateful to Andrew for the effort he has devoted to giving students additional opportunities to advance their skills.

After finishing his studies, Liam would like to work for a small technology company so that he can develop a greater breadth of skills, rather than specialising too soon.

Liam’s advice to other students is:

Be great at what you’re good at, be good at the things you’re bad at. It’s important to do more than what’s just required of your course. Take every chance you can get to develop your skills. Don’t be afraid to contact industry professionals through sites like LinkedIn, it’s a great way to build networks and even reach out to potential employers.
Liam Sorta