University to drive innovation in technology at Festival of Code 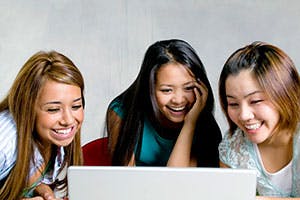 Youngsters from across the Midlands are to gather at Birmingham City University this week to participate in Young Rewired State's (YRS) Festival of Code, an annual event encouraging young talent to create innovative technology applications.

The Faculty of Technology, Engineering and the Environment at Birmingham City University is one of several host centres across the UK who will be assisting a team of under 19s as they participate in workshops and 'hack-days' throughout the week long Festival, developing their technology and coding skills to create apps, internet sites and programmes.

Now in its fifth year and second consecutive year in Birmingham, this year's YRS Festival runs from 5 - 11 August, culminating with almost 600 people from centres across the UK gathering for a celebratory awards event at Birmingham's Custard Factory, where the young technologists will present their ideas and apps before an industry panel. This year's judges include MTV presenter and model Izzy Lawrence, mathematician and physicist Conrad Wolfram and app designer Aral Balkan.

Emma Mulqueeny, Founder of Young Rewired State said: "We're delighted to be returning to Birmingham for this year's Festival of Code. Last year's event was a phenomenal success and we hope to build upon that this year. We have already had 600 young people sign up to the week-long event and have recruited sponsors such as Google, Facebook, OCR, AQA and SAP.

"The Festival of Code introduces under 18s who have taught themselves to code, to the social, educational and economic potential of coding. Very few schools are aware of the coding talent of their pupils. We want to bring out all of these coding geniuses and are encouraging teachers and parents to put their children forward to take part in the festival and be part of a worldwide network of like-minded young people.

"The festival not only offers education on coding though, it also builds a network of coders who will not only learn from their mentors but also from their peers, a skill which is required across all professions."

Ardavan Amini, Head of Enterprise Systems Centre of Excellence, said: "The Enterprise Systems Centre of Excellence is delighted to be hosting the YRS festival of code. We were amazed with the level of passion, innovation and intelligence, of the kids involved, addressing real industry challenges and we are looking forward hosting it again next year."

Get more information about the Festival of Code.