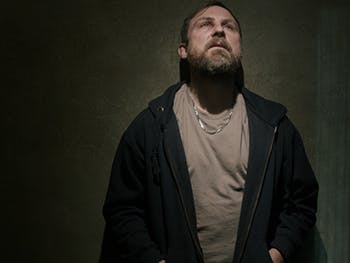 Fixed, a gripping new ‘race-against-time’ feature film starring and produced by a host of UK Midlands movie talent, will be released via streaming services on Monday 22 November.

Written by Birmingham City University film lecturer Ryan Davis, who also co-produced the work with colleague Alan McQueen, Fixed follows the story of a backstreet bookie stabbed, locked up and left for dead after fixing a bare-knuckle fight - played out through nerve-wracking video, text and phone calls all set in just one claustrophobic and thrilling location.

The low-budget, high-concept drama will be available for UK movie fans to watch on-demand before an anticipated US release in 2022.

Industry experts Davis and McQueen, who lecture in Feature Film Development (MA), Screenwriting and Short Film Making (BA Hons), and Film Business (BA) at Birmingham City University respectively, also worked on the feature film with a colleague from the University’s School of Visual Communication and alumni from the School of Computing and Digital Technology, as well as a team of current BCU students from the Film Business degree course.

"Fixed was a tough film to produce and make. We came up against the Covid-19 lockdown and two floods on set. It was almost biblical! The budget was also incredibly tight. We all came together, and against the odds made a movie, set and filmed in the city, that we are all proud of. We can’t wait for people to see it."

Birmingham based production company Gambol Films was founded to ensure was shot in the region and crewed locally. Adhering to strict Covid-secure working guidelines, the film was shot in four weeks with no confirmed cases of the virus amongst the cast and crew during filming.