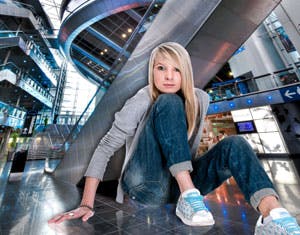 Birmingham City University’s Faculty of Technology, Engineering and the Environment is holding its next open day on Saturday 18 June allowing prospective students the opportunity to find out what courses and facilities they have to offer. The Open Day will be held at the University’s Millennium Point campus in the city centre from 10am until 4pm.

The Faculty was one of the first tenants based at Millennium Point when it first opened its doors in September 2001. This year Millennium Point will be celebrating its 10th Birthday, Millennium Point is a huge and inspiring building that incorporates two popular visitor attractions, national educational centres and commercial office tenants from the government and private sectors.

The Faculty has a range of activities taking place; visitors will get a chance to go on a guided tour to view the facilities on offer including forensic computing lab facilities, Computer Games Lab, Motorsport Workshop and industry standard film, TV and sound studios.

Visitors will also be able to view the Students’ Drift Car that competes as the vehicle travels sideways-on throughout the twisty circuit, there is also a pedal car designed by students that was built for a special edition of Channel Five’s The Gadget Show, play on a games console and watch robotic ‘mice’ find their own way around a specially constructed maze.

Jenny Powell is a second year student who studying BSc Hons Business Information Technology at Millennium Point. Jenny said: “When I first joined the University, I became a student ambassador. It was a great feeling to show prospective students the fantastic equipment and technology that is on offer at this campus.”

In addition to the Open Day at Millennium Point, Birmingham City University’s is also holding Open Days at its other campuses including the main City North Campus in Perry Barr, City South Campus in Edgbaston and Birmingham Institute of Art & Design (BIAD) in Gosta Green.

To find out more on Millennium Point’s10th Birthday visit www.millenniumpoint.org.uk/mybigdayout