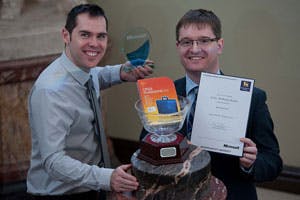 Arti hosted a gala prize-giving for the University’s Faculty of Technology, Engineering and the Environment (TEE) at the elegant Banqueting Suite, in Birmingham’s Council House, in front of a packed house of staff, students, friends, and family.

“These prestigious awards recognise those who go the extra mile to enhance their learning experience, whether through work experience, project work or their efforts to support other students,” said Arti.

“The Faculty has always been proud of its long-term relationships with industry and business. All of its programmes are designed with input and guidance from industry and professional bodies to ensure students are ready to hit the ground running in their chosen professions.

“Our close relationships with industry also mean that students are able to secure a range of interesting placements and project opportunities as part of their studies.” 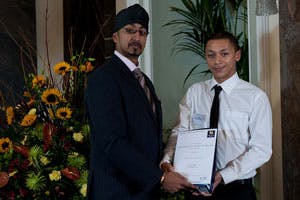 A total of 27 awards were given in three categories: Industry Engagement Prizes, Accrediting Body Prizes and the Faculty Prizes. Accolades were awarded to students from all four of the schools which make up the faculty:

Among the winners was Luke De La Nougerede Shardow who was awarded the Creative Video Productions Prize for outstanding achievement in a film production-related course. Luke, who gained a First Class honours degree, set up his own company, Lightwind Productions, to produce an acclaimed 30-minute film ‘Finding Flynn’.

Luke also produced the short film ‘The Double Date’, alongside fellow prize-winner Anthony Cooper, which has since been accepted into the British Film Institute’s Cinematique! film festival. Anthony picked up an accolade for outstanding performance in a moving image-related course and won praise from BBC Midlands Today correspondent Laura May McMullen.

Scott Brant scooped the coveted Microsoft Prize. Scott left his role as a successful trader with an international financial institution to pursue his dream of a role in the computing industry. Scott, identified by his lecturers as a very talented student who has always exceeded expectations, beat 200 other applicants to secure a prestigious IT role at Britvic Soft Drinks.

Equally dedicated is Elizabeth Bailey, who was awarded the Acivico Award for an outstanding postgraduate student. Elizabeth won praise after helping staff to develop a property investment game. Her talents have also been recognised by the Women in Property Awards, where she was shortlisted for the 2011 West Midlands regional final with the panel describing her presentation as “the best they had seen”.

Also amongst the winners was Oxana Hafeez, who was awarded the Alumni Prize for the School of Engineering, Design and Manufacturing Systems and has now secured her dream job at Jaguar Land Rover.