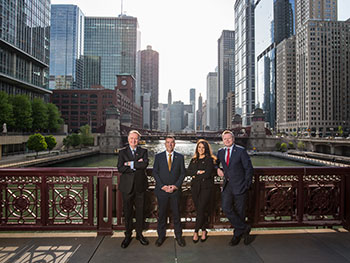 Amid an era of uncertainty in global politics and trade, a leading Birmingham academic has said that the Midlands’ special relationship with the United States is more important than ever.

The comments come from Birmingham City University’s Deputy Vice-Chancellor, Professor Julian Beer, who has been flying the flag for the Midlands at a major business conference in the US.

Professor Beer led a substantial delegation from the region that looked in depth at UK-US trade since Brexit and the inauguration of President Trump.

The British American Business Council (BABC) Transatlantic Conference 2017 took place in Chicago, Birmingham’s sister city. The conference explored the 2017 theme – ‘Navigating the New World’ – which is concerned with the evolving opportunities as the United States, Canada and Europe absorb changes in the realities of economies, trade, borders and governance.

As the leading transatlantic networking organisation, BABC has 22 chapters across the UK, US and Canada, with its Midlands division led by Professor Beer as its President and based at the Greater Birmingham Chambers of Commerce (GBCC).

The USA is the West Midlands’ biggest export market with goods worth nearly £5.5 billion reaching its shores, according to the latest figures. However, trade in the other direction – US sales to the West Midlands – is worth just short of £1.5 billion.

In a post-Brexit world forging new and strengthening existing relationships with the US is particularly important. After leading a trade delegation from the Midlands to Chicago I was heartened and delighted to meet many businesses, organisations and agencies who want to do business with the UK.

“We are already following up on many of the opportunities that came from the visit and of direct relevance to Birmingham City University. For example, we met with several US universities who would like to get involved with us in projects such as STEAMHouse and explore relationships with our Faculties.”

STEAMhouse is a creative innovation centre currently being established in Birmingham’s Digbeth area with the aim of brokering collaborative relationships between arts and creative industries, businesses and academics.

The centre will demonstrate how arts and creativity can be combined with STEM subjects (science, technology, engineering and mathematics) to drive innovation, skills, research and economic growth.

STEAMhouse, backed with a £14 million funding package from government, will provide support to SMEs and new enterprises by developing new products and services through workshops (such as STEAMlab), grants and research cooperation with academics from the University.

“We met again with Kent State University, Ohio – who visited us earlier this month – and who are particularly keen to work with our Faculty of Computing, Engineering and The Built Environment after meeting the team and seeing all of the research expertise which aligned very well to their own. We hope to shortly make an announcement on this strategic relationship.”

The BABC Transatlantic Conference 2017 ran between Wednesday 10 and Thursday 11 May.