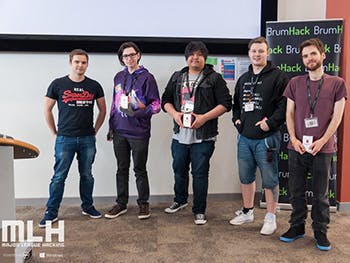 The WizARds, a team of Birmingham City University students, won the Prize for Innovation awarded by Capgemini at the recent BrumHack 6.0 Hackathon.

Computer Games Technology and Computer Science students Liam Sorta, Nathan Dewell, John Paul Ibanez and Scott Brynnink created an augmented reality (AR) wizard fighting game during the 24-hour event. Now in its sixth year, BrumHack is an annual computing invention ’marathon’ for students, held at the University of Birmingham. 2017 saw around 80 students from across the country working in teams to create innovative projects over one weekend.

The teams at BrumHack 6.0 were encouraged to create something innovative, but worked to no set brief otherwise. The WizARds impressed the event sponsors with their AR wizard fighting game, which featured 6 playable characters and some strategic gameplay.

This project was a bunch of fun to work on and came out looking somewhat polished.”

They were honoured to receive the Prize for Innovation from Capgemini – a notable information technology-consulting corporation. The team members all received a Raspberry Pi, a small single-board computer used to teach computer science, as part of their award.

One of the team, Liam Sorta, is a hack regular. He also recently won a prize at HackMed, held at the University of Sheffield. There, he worked with a team of medical and computing students to develop an AR healthcare system, which gives instant visual information about a patient. HackMed was the final hackathon of the season, but we look forward to more successes in the coming year!