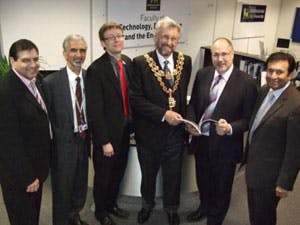 Visiting Birmingham City University’s campusat Millennium Point, in the city centre, the Lord Mayor highlighted its exemplary technology and creative schools which he could see making a significant contribution to Birmingham’s bid to become the UK’s first City of Culture.

Councillor Michael Wilkes, who is also the University’s Chancellor during his term of office, found in Digbeth ‘a new weapon in Birmingham’s armoury’ as it competes with three other cities - Londonderry, Norwich and Sheffield - to become the UK’s City of Culture, 2013.

The Lord Mayor gained insights to the three strands that make up the Birmingham School of Acting – part of the University’s Faculty of Performance, Media and English. Its 140 students can train for acting or stage management, or for community and applied theatre in which they work closely with Birmingham Rep in reaching out to the elderly and homeless. Students also go out to some 80 Birmingham schools to encourage pupils in both drama and interactive social activities. Head-of-School Stephen Simms presides over what is one of the largest and most diverse among the UK’s 23 theatre schools.

Heavily oversubscribed with well over 1000 applications annually, it has also built relationships with Stratford’s RSC, the BBC and major amateur groups such as Crescent Theatre and mounts some fifteen significant productions each year. Stephen Simms says: “The School is already promoting Birmingham as an international cultural centre. We have links with Birmingham’s US-twin, Chicago, and will soon visit Hong Kong, Beijing and Shanghai.”

During his tour of the studios, the Lord Mayor was treated to second year students’ rehearsing the Dublin-based musical ‘A Man of No Importance’ and a class of first-years discussing the qualities of voice projection. An informal chat with some community and applied theatre students prompted him to comment: “The scope and quality of their activities is impressive. Their interaction with the community is very valuable to the City."

The Lord Mayor then toured the three Millennium Point based schools of the University’s Faculty of Technology, Engineering and the Environment. First port-of-call was an impressive example of the state-of-the-art studios used in the School of Digital Media’s wide-ranging, multi-media degree studies. These encompass film and television technology and production, digital image processing as well as courses run in collaboration with Birmingham Conservatoire, including music technology and sound engineering.

Indeed, engineering is close to the Lord Mayor’s heart because of his own Engineering Scholarships fund. He set this up in his mayoral year to support engineering study and practice in Birmingham and says: “I want to encourage and enable young people from Birmingham to take up engineering as a course of study and a fulfilling career.”

With this focus, the Lord Mayor was most interested to see the School of Computing, Telecommunications and Networks electronics activities. These were exemplified by an impressive demonstration of intelligent micro-mouse, mini-robots finding their way round a challenging maze. These now form the basis of an international competition the Faculty runs each year. The Lord Mayor was also impressed when he briefly sat-in on a creative automotive engineering class in the School of Engineering, Design and Manufacturing focusing on developing a model to feature on TV’s celebrated Gadget Show. This lively group was led by guest lecturer, ex-technical director of MG-Rover and champion of Energy Efficient Motor-Sport (EEMS), Rob Oldaker.

At the conclusion of his Millennium Point campus tour, the Lord Mayor said: “The activities of Birmingham City University’s schools here are a valuable creative asset for our City. Their performance, multimedia and creative engineering activities are all making exciting contributions to upholding Birmingham’s innovative heritage."

He also recognised the importance of the campus in the continued development of Eastside as a Centre of Excellence and in supporting economic regeneration.