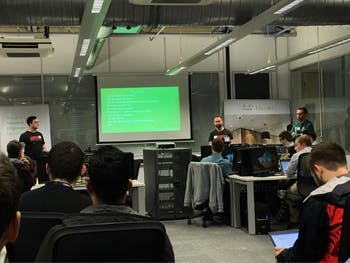 As part of Graduate+ Week, students in the School of Computing and Digital Technology spent the day with staff from Cisco Meraki, a London-based cloud networking company which was acquired by Cisco in 2012.

The team of Cisco Meraki staff gave students an insight into the role of a Network Support Engineer. They discussed the skills set needed for the role, looked at interview technique, and held a Q and A session. To finish the day, students had the opportunity to test their networking skills in one of the University’s computer labs with support from the Cisco Meraki staff.

Tom says that BCU graduates have the skills and attributes Cisco Meraki are looking for: “The School’s degree programmes are of high quality and offer aspiring Network Support Engineers a good education. The BSc in Computer Networks has a very good reputation across the UK, and students have access to high quality equipment.”

Ron Austin, course tutor for computer networks and security degrees at the University, said of the partnership: “Working with Cisco Meraki is a critical part of the success we have had working with industry and fosters a deep understanding of what industry is looking for from graduates. This feeds into our approach as a practice-based, research-informed University”.

Ben Burling graduated from Birmingham City University in 2013 with a First Class degree in Computer Networks. He now works for Cisco Meraki, and says that he wouldn’t have got the job without his experience at the University. He commented on the high quality of teaching he received. In particular, Ron Austin, the Course Leader, was supportive and gave him the opportunity to attend additional modules on top of his course modules, which helped expand his skills.

Josh Nansoz graduated from Birmingham City University with a degree in Computer Networks and Security in 2012. He also now works for Cisco Meraki, and said it was a pleasant surprise when he came to the company to find other BCU graduates there. His advice to students who want a successful career in networking is: “Know inside out how to do things, spend time familiarising yourself with the equipment – it’s not just about passing a course, it’s about gaining the skills and knowledge for your future career.”

Reflecting on the day, Tom Eldridge said: “It has been a highly productive day, and very energising. It is great to meet so many aspiring graduates, and exciting to see their enthusiasm.”