The boob box came to BCU’s City Centre Campus on Thursday 6 and Friday 7 October, with the aim of providing information and raising awareness among students on breast cancer.

The tour visited some of the biggest universities in the country in order to raise awareness, with BCU being the only Midlands institution chosen.

The #FeelYourBreast campaign has been running for the past three years and aims to raise awareness around all things breast cancer.

Students were also able pick up some free goodies, which included where they could find more information and support.

After the tour, Lounge announced on their social media channels that the #FeelYourBreast campaign has raised over £350,000 for Breast Cancer Awareness charities they work closely with – and they are still counting.

“We were delighted to welcome Lounge back onto campus and see them raising the awareness of such an important campaign that affects so many people,” says Lucia Puricelli, Programme Manager of Higher Level Skills Match (HLSM).

“We hope that this campaign will help further educate our students and staff on breast cancer, with the ongoing impact to further raise awareness through to family and friends.

BCU has built a long-lasting relationship with Lounge, providing student and graduate support via their the HLSM programme, part-funded by the European Social Fund, which has seen BCU students secure graduate roles, year-long internships and more with the company.

“Initially, our relationship began to support graduates securing roles, but has since blossomed into so much more,” said Georgia Perry, Head of People at Lounge Underwear, in a recent blog.

“We’re so lucky to have built a trusting bond where we can now go to one another for anything and express our thoughts and ideas.” 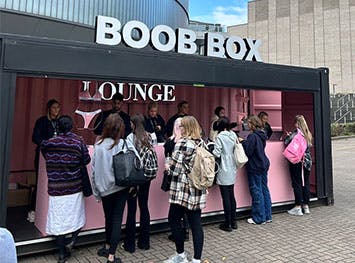 The company also recently took home the award for ‘Independent Online Retailer of the Year’ at this year’s Birmingham Awards.

The judges noted that it was their journey so far, with a hyperlocal story and seeing their potential to go further, which saw them take home the accolade.

As one of the world’s fastest-growing lingerie companies, it is inspiring to see the recognition of their hard work, drive, and commitment.

“It has been amazing to watch Lounge’s growth and their continued commitment to support all women,” says Nicole Riley, Graduate Talent Consultant at BCU.

“They are truly a Birmingham brand and enjoy every moment working closely with the team – welcoming them onto campus for campaigns, filming our partnership and supporting recruiting our fantastic graduates into the business.”

University wins national award for continued excellence in diversity a...