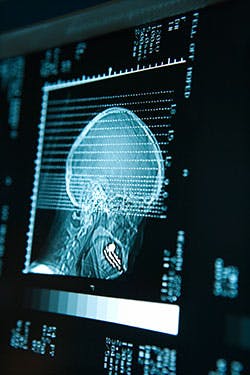 Early signs of Alzheimer’s disease can be detected years before diagnosis, according to researchers at Birmingham City University.

The study found that sufferers of a specific type of cognitive impairment have an increased loss of cells in certain parts of the brain, which can be vital in detecting which patients will progress to a diagnosis of Alzheimer’s.

A team of researchers from Birmingham City University (UK), in association with colleagues from Lanzhou University (China) and the Alzheimer’s Disease Neuroimaging Initiative, conducted a brain scan analysis over two years, of patients suffering from amnestic mild cognitive impairment (aMCI) – a condition involving the diminishing of cognitive abilities, from which 80% of patients progress to a diagnosis of Alzheimer’s.

Scans showed that the loss of grey matter in the left hemisphere of the brain was particularly widespread and degenerative for those patients at high risk of developing Alzheimer’s, compared with those with no active neurological disorders.

One of the researchers involved in the study, Professor Mike Jackson, from Birmingham City University, said: “Continuous loss of cells within the regions of the brain highlighted in this study should act as alarm bells for doctors, as they may indicate that the patient is on course to developing Alzheimer’s.”

The brains parahippocampal gyrus, a region which is known to be related to memory encoding and retrieval, was highlighted as an area that should be looked at carefully when examining brain scans to detect early signs of the disease.

Treating Alzheimer’s early is thought to be vital to prevent damage to memory and thinking. Although treatments are available to temporarily ease symptoms, there has been little in the way of success in slowing down the cognitive decline in patients with mild to moderate Alzheimer's, which has been partly put down to the late timing of the diagnosis.

Experts at Birmingham City University hope that this study will aid other researchers to find an effective clinical treatment to delay the conversion to Alzheimer’s.