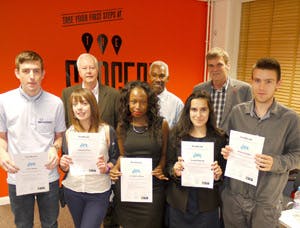 For the third successive year, Birmingham City University has hosted the UK heat of the European Business Masters Cup (EBMC).

Students from across the nation gathered at the University on 29-30 October 2012 to take part in what became a gruelling business competition to discover the UK Champions.

Following an opening address by Vice-Chancellor David Tidmarsh, competing students from the University of Liverpool, Aston University and Birmingham City University were put into randomly selected mixed teams, all competing to be the UK heat winners.

Teams were tasked with the job of controlling the fortunes of a car manufacturing company, making difficult decisions on a variety of areas including: Production, HR, Finance, Sales, Marketing, Operations and Manufacturing. Each team were ultimately competing to maximise their market share and increase their company’s overall share price.

The teams impressed the judges in their final presentations, by going as far as developing branding strategies and attempting to break into new sectors by making alternative energy vehicles.

Jacqueline Maya said: “This has been an amazing two days of competition. I was a bit disappointed when I didn’t win last year, but I was determined to enter and win this time around. I’ve learnt such a lot from it and it’s been a great opportunity to gain some new employability skills.”

Professor Paul Bowker, Associate Dean at Birmingham City Business School, who was also on the judging panel, said: “Every year we have some great students taking part, not just from Birmingham City University but from all of the universities, and this year has been no exception.

"They all seem to be going from strength to strength and the quality of their questioning and presentation ideas were very impressive.”

Host and organiser Ron Brown, Innovation Development Manager from Research Innovation and Enterprise at Birmingham City University, said: “This year the UK competition has been bigger and better with more than 90 students from the three universities applying to take part. Here at Birmingham City University we had more than 50 applicants for 20 places.

"Our students made a great contribution during the two days, and I know that everybody found the game to be exciting and challenging, and made them think – it’s definitely something that they can add to their CVs."

For further information about the EMBC competition or the Concept Factory, contact Ron Brown on 0121 331 5342 or email: ron.brown@bcu.ac.uk