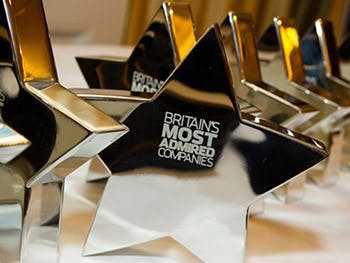 The shortlist for the University's annual survey of Britain’s Most Admired Companies has been announced, with Aldi shunting Sainsbury’s off the longlist.

The project, run by Management Today in conjunction with the University, is the only one of its kind in the UK and is created as a result of research by Professor Mike Brown from the Business School.

This year marks the 24th time that the project has taken place, with the winners set to be announced at an awards ceremony on Tuesday 2 December.

Offering a unique insight into the real factors behind corporate reputation, the winners are identified by peer review, with Britain's top companies and their bosses asked by Professor Brown and research colleague Stuart Laverick to assess their rivals, a revealing process that shows what businesses really think they need to succeed.

Last year’s winner Diageo made the 50-strong list although Sainsbury's failed to make the top 10, despite coming second in one of the categories last year.

Aldi made the list for a second year while Alliance Boots has also been included, with some analysts commenting that the continued growth of discount outlets from Germany like Aldi and Lidl, as well as the steady rise of Waitrose, is taking its toll on the reputation of mainstream supermarkets.

Other candidates included Pets at Home, which floated on the stock market for the first time this year, while Swedish bank Handelsbanken replaced Santander on the shortlist.