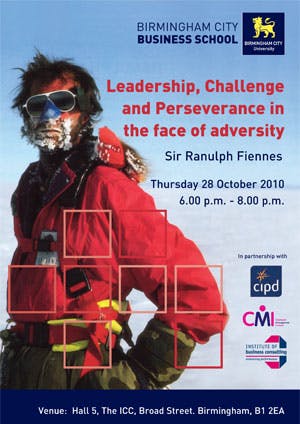 The man described by the Guinness Book of World Records as the world’s greatest living explorer, Sir Ranulph Fiennes, will be talking to Birmingham’s business leaders.

He has been invited by Birmingham City Business school, which is part of Birmingham City University and will be delivering a talk entitled Leadership, Challenge and Perseverance in the Face of Adversity on Thursday 28 October 6-8pm at the ICC, Birmingham.

Ranulph Fiennes is the holder of several endurance records and has undertaken numerous expeditions and was the first person to visit both the north and south poles by surface means and the first to completely cross Antarctica on foot. In May 2009, at the age of 65, he climbed to the summit of Mount Everest. becoming the oldest Britain to have done so.

He will be telling business leaders about the experiences gained whilst undertaking some of the most gruelling challenges imaginable. He will describe the motivation that led him to attempt these challenges, and the amazing perseverance that enabled him to succeed to the end.

Executive Dean of Birmingham City Business School, Christopher Prince, said: “We are very excited to have Sir Ranulph Fiennes visit to deliver his talk. All places for the event have been taken so we are expecting a ‘full house’. Sir Ranulph is the latest outstanding, inspirational speaker that we have invited to talk to Birmingham’s business leaders. Previously Jeremy Darroch, the Chief Executive of Sky and Sir Terry Leahy, Chief Executive of Tesco have given talks.”