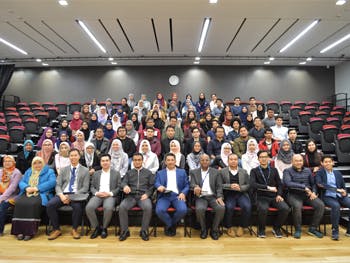 Malaysian students from across the Midlands region have gathered in Birmingham to celebrate their successes as part of a government-backed initiative.

MARA is a Malaysian government agency responsible for developing, encouraging, facilitating and fostering economic and social development within the Southeast Asian country, particularly in rural areas.

The agency sponsors Malaysian students to study in top universities around the world, including higher education institutions across the UK, and the event on Tuesday 28 November allowed MARA staff based in London to network with Malaysian scholars situated in the Midlands, as well as academics at Birmingham City University.

MARA has offices around the world in countries such as Australia, Germany, Russia, the USA and the UK, all of which are dedicated to supporting MARA scholars studying in those territories. The event at Birmingham City University provided an opportunity for MARA to get feedback on its services to students based in the Midlands and to understand the experience of their studies at each institution.

MARA sends more than 40 Malaysian students each year to study on the Association of Chartered Certified Accountants (ACCA) course at Birmingham City University. Earlier this year, 20 year-old Syahira Binti Md Nor from Malacca in Malaysia – who studies on the ACCA course through MARA at Birmingham City University – was ranked in a top 10 global list following her success in a taxation exam.

“It is not a success only for myself but a gift for my parents and my lecturers too. I hope my success can inspire people that dreams can come true with lots of hard work.”

In the ACCA exam that Syahira triumphed, her tasks included calculating taxable incomes as well as demonstrating knowledge of how pension contributions are calculated and an awareness of tax deadlines.

ACCA have more than 486,000 students worldwide and it is recognised in 178 countries. Birmingham City University is accredited as an ACCA Platinum Approved Learning Partner, the most prestigious level held by just a small number of universities across England, in testament to the quality of both the teaching provision and student support provided for ACCA students.

“We have around 1,000 graduates who live in Malaysia and who hold eminent positions in fields as diverse as banking and finance, higher education and government, and in careers where they are making a positive impact on their country.

Back here in the UK, Malaysian students enrich our campus community immensely. Through groups such as our Malaysian Student Association, our scholars can keep in contact with events at home, but they are also given an opportunity to highlight their unique culture and customs to fellow students and staff around the University and across the city.
Parmila Murria