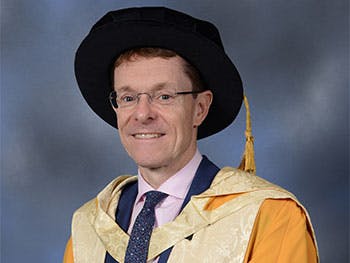 The boss of John Lewis has spoken of how business can be a force for positive social change as he was presented a top university honour.

Andy Street, Managing Director of the department stores, was handed an honorary doctorate by Birmingham City University to recognise his achievements in business.

He was awarded the accolade during a ceremony held at Birmingham’s Symphony Hall yesterday (Wednesday 27 July) alongside graduates from Birmingham City Business School.

Accepting the honour he told the audience that business had the power to change people’s lives, promote inclusivity and encourage diversity.

He said: “Thank you for bestowing this huge honour on me. It means a great deal to me, particularly to come from a university that bears the name of my home city.

This is a time when Birmingham is enjoying something of a remarkable renaissance.

Business itself can be a social force for good, it can give people social mobility it allows for inclusivity and people often don’t think of businesses like that.

I like to think the John Lewis story is that it’s very inclusive, has allowed people to make things of their lives and that’s what business should be about.

Andy joined the John Lewis Partnership after graduating from Oxford University in 1985 with a degree in Politics, Philosophy and Economics.

He became Managing Director of the John Lewis Division in 2007 and has led the business through times of significant change in both the economy and the retail industry.

During his speech he praised the cooperative origins of John Lewis, which remains an employee owned organisation, and told graduates to embrace difference.

He added: “Your University also stands up for inclusivity, just look around the room today. But difference goes much, much further than that. It goes to the notion of different ideas, different thoughts being cherished.

“I’ll bet that all of you during your time at university have enjoyed finding out how people are different and how they think differently and that genuinely must be cherished. It is so important now, given all the difficulties we face in the world.”