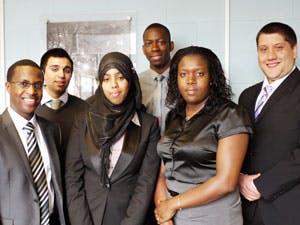 Business minded students from Birmingham City University have been crowned champions in the UK heat of the European Business Master Cup competition, a business simulation game open to all university students.

Facilitated by Stuttgart Media University (HdM) each team had to control the fortunes of a fictitious company making alternative low energy cars, defending their market position against the other teams in a series of simulations designed to develop their business and team skills.

Professor David Tidmarsh, Vice-Chancellor of Birmingham City University, opened the event. He said: “This is a great opportunity for students to develop and practice their business skills in a safe environment and is an example of how we are assisting our students with their employability in an ever competitive market.”

Over the course of five ‘periods’ the teams had to make decisions to maximise their opportunities based on the information given to them at the start of each period. With changing conditions the teams had to build on their decisions from earlier periods, cumulating in a presentation to a panel of judges.

In a very close contest, Birmingham City University were declared the winners, and will now go on to represent the UK at the EBMC Finals which take place in January 2012 in Stuttgart. They will take on teams from Austria, France, Germany, Italy, Poland, Scotland Sweden and Switzerland.

Ron Brown, Innovation Development Manager from Research Innovation and Enterprise Services (RIES) at Birmingham City University, organised the competition. He said: “This is a great result for our university in our second year of competing for the whole team to be invited to the final.”

The winning team of Birmingham City University students from Birmingham City Business School (BCBS) and the Faculty of Technology Environment and Engineering (TEE) were consistent throughout the two days and received some very favourable comments from the judging panel on their final presentation and the facilitators on their performance throughout.

On winning the competition student Anderson Banda said: “It’s been a tough couple of days but I’ve learned a lot, really enjoyed it and am looking forwards to the finals.”

Guy Jones, guest judge and Sales and Marketing Director for MG Motors and Head of UK and European Operations, added: “I’ve seen many presentations from sources at all level and I was very impressed with the content covered by the teams especially as most of the students have little experience of this sector.”

Professor Paul Bowker, Associate Dean at Birmingham City Business School and fellow judge, was delighted that a team with BCBS students won the competition and Dr Steve Harding, Head of Policy Development within RIES commented: “this is just another example of the work that the university is doing in building up our links with other universities in the UK and abroad.”

Birmingham City University is collaborating with Stuttgart Media University (HdM) and the University on Nantes on the European Cluster of Creativity and Enterprise (ECCE) Innovation programme.

Birmingham City University is running a major awareness campaign in the Midlands to demonstrate how it is upgrading the future of individuals and companies. Find out more at www.bcu.ac.uk