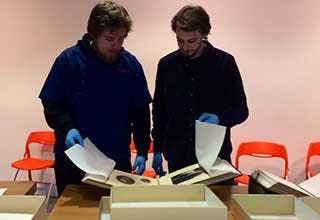 Photography students, from the School of Visual Communication, worked in collaboration with the Library of Birmingham archives team exploring the theme of conflict within a historical and contemporary context.

Their aim was to develop ideas for installations comprising both still and moving images, whilst working directly with original material from the photographic archives at the Library of Birmingham.

Three final year Visual Communication Photography students began working on the project at the start of the year, guided by Ravi Deepres, Professor of Moving Image and Photography at Birmingham City University. In sessions facilitated by Pete James, Curator of Photographs, the students were introduced to a range of visual and textual materials from the archives of the Library.

Some of the materials documenting the Franco-Prussian War and Siege of Paris in 1871 were from the Sir Benjamin Stone Collection. Albums of official photographs documenting the impact of the Birmingham Blitz during the Second World War were also used.

For a second year, the School of Visual Communication teamed up with Flatpack Festival. During the festival, the University’s Parkside campus became a hub for filmic ingenuity and innovation featuring an industry day, installations, exhibitions and workshops. Students from courses across the University were also actively involved including School of English, Digital Media Technology and Birmingham School of Acting.

"These resources became creative tools and content for a multimedia piece which explored both the loss of identity, which occurs through the clouded, smoke and mirror, somewhat never understood, experience of conflict."

The students completed a short film premiered in March 2016 at 'Swipeside' - a collaboration between Birmingham City University and Flatpack Festival, which supports new talent in film, animation and multi-media. The film will have several repeat showings at future events throughout the year.

You can watch the short film below.