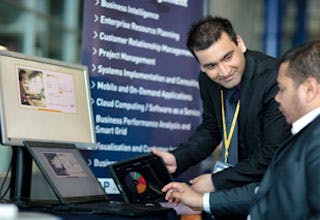 The University’s partnership initiative with Birmingham City Council and SAP’s University Alliances programme has resulted in a significant, joint commitment which will develop a unique knowledge-base in the city. This SAP-based resource is also expected to attract significant national and international business interest.

In conjunction with its partners, the Academy will develop a wide range of projects. At its core is the new MSc Enterprise Systems Management. This unique course is designed around SAP certification and will particularly attract the many students from the UK and overseas wanting to familiarise themselves with the software of the enterprise systems leader whose programs are used widely by major businesses and public services worldwide.

The course encompasses the four key elements of Enterprise Resource Planning, Customer Relationship Management, Business Intelligence and Business Objects. Students will also be enabled to gain the valuable, extra official SAP Certification known as TERP10. The course incorporates a thesis project which a student can select from a range proposed by SAP’s major local users, including Birmingham City Council.

This project is a superb collaboration between SAP University Alliances, Birmingham City University and Birmingham Council. Birmingham is the world’s largest local government SAP-user. This will be an invaluable local resource to support the development of our digital economy and reinforce the depth of ICT skills necessary to support modern local public services. I also believe this is a blueprint for future collaborations between business, academia and the public sector.”

Among other projects planned for the new Academy is a further postgraduate degree aimed at meeting the needs of local major SAP users enabling them to specialise in a particular aspect of SAP.

The Academy is also planning to develop the use of SAP applications both on iPads and iPhones to benefit both students and commercial users. It will also work with major local SAP-customers to develop instructive case studies of value to students and other potential company users. In due course research degrees will be initiated leading to PhDs covering enterprise systems management related topics, particularly in the public sector. The University is also piloting an initiative that can benefit SMEs using Enterprise Systems Management applications using new emerging technologies such as cloud computing.